The Santa Rosa Symphony (SRS)  has seized upon the need to change their programming due to Covid19 as an opportunity to celebrate diversity and  highlight some brilliant works by women.  They have named Ellen Taaffe Zwilich as Artistic Partner and are featuring her works in all five upcoming concerts this spring.  The first of these is Sun. Jan. 24, 3 pm (pacific time) and it will stream (free of charge), info here.  The famed and distinguished Zwilich was the first woman to be awarded the Pulitzer Prize in music.  The SRS will perform her Concerto Grosso of 1985, which I well remember teaching in music appreciation classes in the early 1990s — it was included in the textbook I was assigned — it was exciting to find it there among the many familiar “masterpieces.”  Here is a discussion with Zwilich and SRS Music Director Francesco Lecce-Chong.

The Viennese Marianne von Martines (1744-1812) also received fame and awards, such as being the first woman appointed to the renowned Accademia filarmonica of Bologna. The 1773 portrait of Martines was commissioned at the time of that honor, and her family was granted noble status (and allowed to include “von” in their names) shortly after that.  The SRS will perform her Sinfonia in C, an early and significant example of the genre of the symphony. 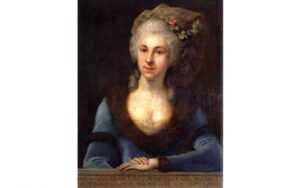 The Women’s Philharmonic (then the Bay Area Women’s Philharmonic)  “unearthed” the Martines Sinfonia in the 1980s and included it on their first CD “Baroquen Treasures” (1990, dir. JoAnn Falletta), so we have always hoped it would gain traction — we are so happy to see it receiving wider recognition. It reveals Martines as an important figure in the development of the early symphony, and a true peer of her friends W.A. Mozart and F.J. Haydn.

The SRS’ press release is here and the page about the concert is here (includes a link to the program book).