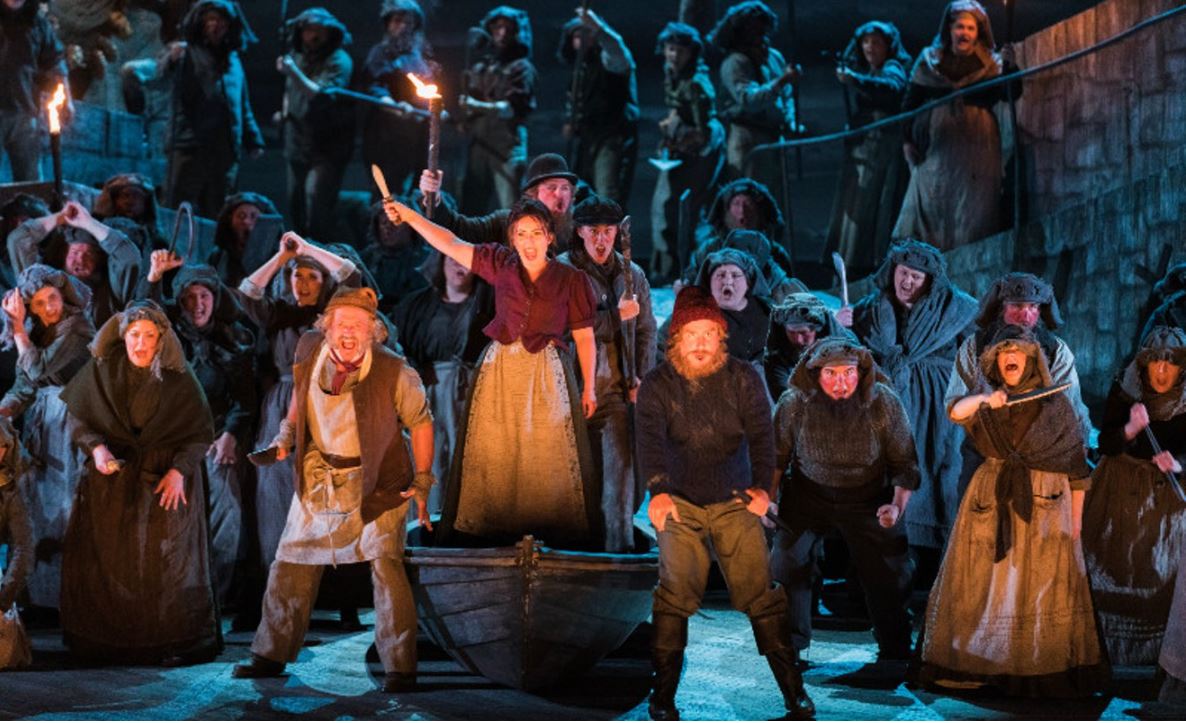 The Wreckers — the bloodthirsty villagers — have the title role.  Soprano Mané Galoyan, center.

116 years after its premiere, Dame Ethel Smyth’s The Wreckers received its first-ever staging by a major American opera house. In keeping with its renewed focus on the ‘grand’ in Houston Grand Opera, the HGO production on Friday October 28, 2022 was a powerful tour-de-force, with exceptional singing, a superb set, and even a bonfire and crashing waves. The production was directed by Louisa Muller and conducted by Patrick Summers, with choir direction by Richard Bado. Grammy-award winning mezzo soprano Sasha Cooke fully embodied the role of Thirza while soprano Mané Galoyan matched her note for note in the antagonistic role of Avis. The men deftly supporting these two strong female leads were Reginald Smith, Jr. in the role of Pascoe, Norman Reinhardt as Mark, Daniel Belcher as Lawrence, and Paul Groves as Tallan.
With a set designed in Cornwall by Christopher Oram and built in Wales, the Houston Grand Opera transported audience members to the cliffs and caves of a small, isolated community in Britain of yesteryear.

Concert goers overheard in the hall were struck by the “dark” and “morbid” tale of a society that kills to survive – and does it in the name of God. The oppressive character of the community was especially portrayed by the zealous, fanatical sixty-person choir. At times, the choral numbers were overwhelming, conveying the conviction of their beliefs through sheer volume. Their righteousness and blind belief in their way of life was palpable at every turn.

For those not familiar with Smyth’s most famous opera, The Wreckers is set in an 18th century isolated and impoverished religious community on the coast of Cornwall. In order to survive, the villagers extinguish the lighthouse beacons, causing passing ships to crash on the rocky shores. But they don’t just loot the wreckage; they kill any survivors. They also see themselves as God’s chosen people, and thus their sins are absolved by their church and their spiritual leader, Pascoe. In the first act, the villagers discover that someone has committed a treasonous act by lighting beacons on the shore, thus directing ships to safety and causing the community to starve. Whoever is lighting the beacons is accused of doing Satan’s work, so heinous is their crime. Underlying this traitorous act is the adulterous affair between the minister’s wife, Thirza, and a young fisherman, Mark; although, while the audience is aware of the affair in the first act, the community only learns of it in the third. Curiously, for the villagers, adultery, while sinful, is less odious than lighting the beacons. 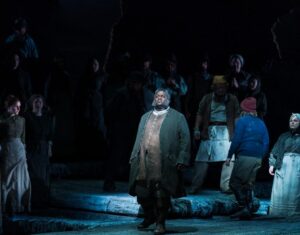 Pascoe, the Methodist minister and Thirza’s much-older husband, was played by Reginald Smith, Jr., whose booming voice aptly conveyed the patriarchal and domineering qualities of the character. Other zealots include Lawrence, the lighthouse keeper (whose job ironically is to turn out the lights), and Tallan, the tavern owner. Lawrence’s teenage daughter, Avis, is in love with Mark. His rejection of her affections is the catalyst that proves the adage, “hell hath no fury like a woman scorned.” Avis (rightly) suspects Mark and Thirza of having an affair and (wrongly) accuses Pascoe of lighting the beacons and betraying the community, believing him to be under the spell of his strange and corrupt wife. Smyth gives Avis some of the best material in the whole opera, demanding Carmen-like fluidity and Wagnerian power from a character who is only supposed to be seventeen years old. Soprano Mané Galoyan navigates this role with ease and was a joy to watch as she schemed and flirted and lied.

The heroine of The Wreckers is Thirza, expertly played by Sasha Cooke. From the beginning Thirza is resolute and defiant. She disagrees with the religious zeal of her village and refuses to pray beside them because of their deadly deeds. Like Carmen and unlike most 19th-century female roles, she is not portrayed as crazy or hysterical. The role is also a difficult one to sing. Like Avis, Thirza demands a powerful voice that is also capable of nuanced emotion and agility, and it requires a technique that can carry through all three acts. Sasha Cooke made it look effortless. In the end, Thirza and Mark, who have been lighting the beacons together, refuse to let Pascoe take the blame for their crime and they confess to both lighting the beacons and their adultery. When given the chance to repent and live, Thirza refuses, choosing to stand by her convictions even in death. 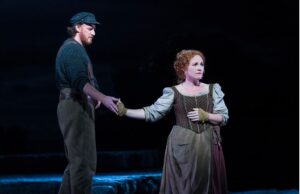 The performance of this tragic tale of right and wrong by the singers, the chorus, and the HGO orchestra far outshone the Amanda Holden translation and a few curious but necessary artistic decisions by the production team. Although the translation by Holden departs at times from the original French libretto by Henry Brewster (1850-1908), it presented a more realistic text than the original (and unwieldy) English version translated by Smyth and Alma Strettell in 1909. While the Holden translation makes the work accessible to English-language audiences and eliminates the awkward use of ‘thee’ and ‘thou’ in Smyth’s 1909 text, it keeps the too-frequent rhyme schemes and the still-awkward English diction. The Holden translation is an improvement but still does not rise to the level of the music. Having heard the Smyth/Strettell English version at Fisher Center at Bard SummerScape in 2015 and the original French libretto by Brewster at Glyndebourne in 2022, there seems to be a case for the French as the definitive text. Smyth collaborated with Brewster on the French libretto, and it was the language to which she originally set the music; the declamation and melodic contour align in a way that no translation has yet matched. Holden’s version is more approachable than Smyth’s but another production in French is needed for further comparison.

One artistic decision was unexpected. Because the production team decided on one intermission between Acts 1 and 2 and no intermission between Acts 2 and 3, the Prelude to Act 2 (On the Cliffs of Cornwall) was shifted to connect Acts 2 and 3 and allow time for a quick set change. Although a majority of the audience would not have noticed the change, those of us who were expecting the Prelude after the intermission were quite concerned that the Prelude had been outright cut, when it is such a colorful portrayal of the stormy seashore and sets the stage for the drama that follows. Musically, the Prelude also foreshadows some of the leitmotifs in Act 2, and its appearance after Act 2 seemed to interrupt the musical and narrative flow. Although Acts 2 and 3 in the cut English versions are relatively short, one wonders if the performance would not have been better served by keeping the Prelude in its intended place and instead adding a second, brief intermission.

Despite these minor concerns from a musicologist who spends a lot of time thinking about Smyth and her music, the performance was a rousing success. The audience was excited and intrigued, chatting at intermission and after the final curtain about the tragic nature of the work, the themes of morality, and the power of the soloists, chorus, and orchestra. The cast and crew received a standing ovation and well-deserved applause.

One hopes that, with successful major productions on both sides of the Atlantic, Smyth’s grand romantic opera will make its way into the standard repertory. It is a work that demands much but rewards more. It is also a work that perhaps hasn’t yet seen its full potential fulfilled. Other early 20th century works have had hundreds of interpretations that inform our understanding of them today. Only through more productions can questions of interpretation and merit ultimately be addressed.

The Wreckers runs October 28 – November 11, 2022 at the Wortham Theater Center in Houston, Texas.