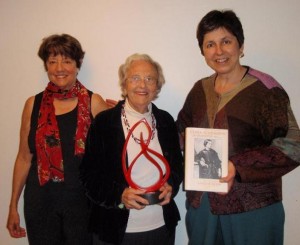 As President of Women’s Philharmonic Advocacy, I am proud to grant the AMY Award for Lifetime achievement in Music Scholarship to Dr. Nancy B. Reich. Her book, Clara Schumann: The Artist and the Woman (1985; rev. ed. 2001), was the first book of serious musicological scholarship devoted to a female musician. The very different scholarly landscape that surrounds us now, in which feminist scholarship and interest in women’s lives and musical creations is mainstream, is in a great part due Dr. Reich’s pioneering work.

Today Clara Schumann is both the subject of a range of scholarly inquiry as well as increasingly part of everyday discourse. For instance, witness the Google Doodle just last week—the first Doodle to honor a female musician. As a composer, Clara Schumann’s music, from her songs, piano music and chamber works, to her powerful piano concerto, are widely performed and recorded.

Reich’s subject matter was new for the field of musicology, but her research methods were solidly grounded, and the precision, detail, and discipline with which her work was carried out has led it to be widely respected and influential.

Dr. Reich has been generous and helpful to scholars from around the globe who are researching Clara Schumann and related subjects. By honoring Dr. Reich we recognize and celebrate her impact on musicology, as well as on the musical world in general.

Reich’s Clara Schumann: The Artist and the Woman, was hailed by critics as a major contribution and has been translated into German, Japanese and Chinese. In further celebration of Dr. Reich receiving the AMY Award for Lifetime Achievement in Music Scholarship, we are happy to announce that Cornell University Press, the publisher of Dr. Reich’s book, plans to reissue it in electronic format in the very near future.