NPR featured the life and music of Sofia Gubaidulina, pictured above, on All Things Considered. Gubaidulina
just turned 90, and there is a new album revisiting some of her greatest works.  Read more at NPR’s website, or listen in below.

The Wichita Eagle speaks with conductor Laura Jackson, who will be the guest conductor for the Wichita Symphony next weekend.  She will be the fourth woman guest conductor the symphony has had in its existence.  Jackson speaks about the changing climate for women conductors “Now there are women who are everywhere… It’s like the floodgates are opening.”

The important and thoughtful work of Louise Toppin was recognized by Classical Voice North America in an article by Xenia Hanusiak, discussing the the African Diaspora 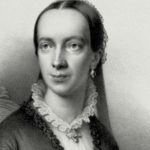 Music Project – a database recognizing 4,000 songs and 1,200 symphonies (!!) by composers of African descent.

Emilie Mayer — described in her lifetime as “The Female Beethoven” — is featured on the BBC’s Composer Of The Week!  Have ANY of her symphonies been performed in the U.S.?

Renate Matthei of Furore Music Publishing was named an Honorary Member of the German Music Council, (DMR) the umbrella organization for musical life in Germany.  In noting her achievements the DMR stated “If the young generation of women now find better conditions, then this is due to the fact that you and your colleagues worked hard to achieve this 40 years ago.”

ICYMI, Joshua Kosman (of the SF Chronicle) rails against those who resist the move to expand and diversify the canon — “What is so damn terrifying about the possibility that exploring new and diverse musical sources — living composers, women, creators of color — might prove rewarding?”

Finally, Jeremy Reynolds writes for the Pittsburgh Post-Gazette about the work of a forward thinking ensemble in the city: Resonance Works Pittsburgh.  The group is a small “performing arts company” that seeks to be more inclusive in their programming in every concert.

We look forward to hearing from you — info@wophil.org