The music of the traditional male canon is well documented; however the roles of the female composers who had roles in the musical lives of those men has been marginalized — this is the historic process of patriarchy.  For our new Hidden Herstory series we are taking in turn a famous male composer, and giving a fresh look to the female composers he knew. We will talk about their interconnected lives, careers and their substantial influence upon the male composers.  Through this series we aim to reframe women composers and their impact, moving towards histories, and herstories, that are both compelling and truthful.

Hidden Herstory in the time of Mozart

Wolfgang Amadeus Mozart is (for many) synonymous with classical music, known throughout the world as one of the greatest male classical composers of all time. However, how many of us know that Mozart spent a lot of his life surrounded by extraordinary female composers? These women, in addition to composing their own spectacular music, influenced Mozart’s life and work, in ways playing a significant – and still largely unrecognized — role in the development of classical music as we know it.  One highly influential figure in Mozart’s life was his sister, Nannerl — we have discussed her before, for instance here and here. But since none of her music survives, we won’t feature her in this post. 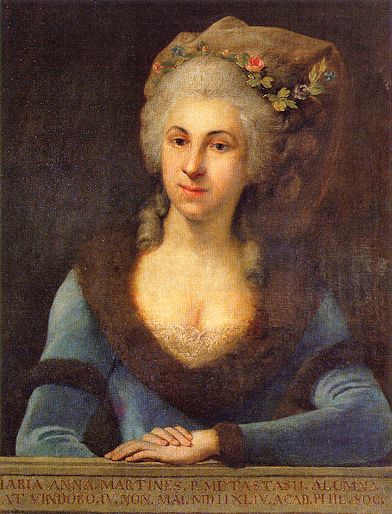 One of the greatest composers of the Viennese scene, Martines was also an extraordinary pianist, singer, teacher, and salon organiser. Twelve years older than Mozart, Martines established herself at the epicentre of late 18th-century Vienna. Publishing her first works at age 16, she wrote over 200 pieces, including what is usually considered to be the first known symphony by a woman, her Sinfonia in C Major (a list of editions and further sources are given below).  In addition to her compositional career, Marianna Martines founded a singing school for young women in 1796 and hosted legendary salons attended by the musical celebrities of Vienna, including composers Joseph Haydn and Antonio Salieri and tenor Michael Kelly. In 1773, Martines became the first female composer honoured with entry to the Accademia Filharmonica Bologna, a prestigious musical institution of which Wolfgang Amadeus Mozart was also a member. Her extraordinary Dixit Dominus (Psalm 110) was offered as her entry piece; and this formal portrait of her was made for the occasion.

When Mozart came to Vienna, he frequently attended Martines’ weekly salons and wrote various four-handed piano sonatas for the two of them to play together. Martines’  influence is evident in Mozart’s Mass K. 139 (1768), which he likely based on Martines’ Mass in D Major (according to Karl Pfannhauser in his article Zu Mozarts Kirchenwerken 1768). In 1773 Mozart is also said to have written his Piano Concerto in D Major K. 175 for Martines to perform. Martines’ keyboard sonatas in A major and E major are, by many, considered superior to Mozart’s offerings in this department.

Often referred to as “the Blind Enchantress,” she was an incredible musician, composer, teacher and businesswoman. A piano prodigy, Maria Theresia von Paradis also stood at the heart of Viennese musical life. Her legendary prowess on the piano led many composers to write music for her, often on commission. These included Joseph Haydn, Antonio Salieri (his Organ Concerto) and Wolfgang Amadeus Mozart, who wrote his Piano Concerto No. 18, K. 456 for her. A trailblazer and teacher, in 1808 she set up the first school in Vienna for blind girls, with her lifetime earnings supporting the school for decades after her death.

Maria Theresia von Paradis’s compositions spanned many genres, including five operas, cantatas, keyboard music and songs. Whilst much of it has been tragically lost, some examples of her work remain. Most of her comic opera Der Schulkandidat is lost but of the few sections that remain, the Overture is published and easily accessible (performed by our own namesake The Women’s Philharmonic in 1994).  Her Fantasie for Piano in G-major is widely available, and several songs and other works for solo voice and keyboard are available on IMSLP.  Her song “Morganlied eines armen Mannes” was recorded by soprano  .

Aside from her music, the story of Paradis herself is brought to life in the “Paradis Files,” a newly composed chamber opera by the great British contemporary composer Errollyn Wallen, commissioned by disabled-led theatre company Graeae. (Mentioned previously in our 18th April Monday Link Round-Up). This opera, exploring her life and legacy, features a terrific cast and crew of disabled performers; it is soon to be available on streaming, so watch this space!

Another woman at the centre of the Viennese scene was Josepha Auernhammer.  An exquisite pianist and former pupil of Mozart,. Auernhammer performed many concerts with Mozart over the years, including Mozart’s Sonata in D Major for Two Pianos K. 448, written for them to play together. Mozart’s Auernhammer violin sonatas, Nos. K. 296 and K. 376-380, were also dedicated to Josepha. Auernhammer’s compositions number several violin and piano pieces; her elegant Six Variations on a Hungarian Theme was featured on a piano recording in 2010 by Judith Pfeiffer. Her other compositions include Harpsichord Sonatas in A major and E major, a violin sonata in C major, and several sets of variations including one based upon ‘Der Vogelfänger bin ich ja’ from Mozart’s Magic Flute.  These are not yet commercially recorded (the link gives an excellent live recording), but can be found on IMSLP.  We hope someone will take up the challenge of recording them soon!

What is frustrating is the lack of accessible literature connecting these three women. Both Marianna Martines and Maria Theresia von Paradis enjoyed the royal patronage of Empress Maria Theresa throughout their careers – Von Paradis as her goddaughter and the daughter of her court councillor, Marianna Martines as a court favourite child prodigy turned adult composer. Both were at the centre of the Viennese salons and both promoted women’s education. Haydn and Mozart’s relationship is well documented, along with Salieri, Beethoven, and other male composers, however these three extraordinary women, living and working in Vienna, must have known each other as well.

Most of the literature fails to mention these women at all, giving a cursory mention as side notes, background musicians and friends. Large parts of musical history are ignored when these women are neglected.

As I’ve pointed out, these women played a vital part of the Viennese scene as trailblazing composers, musicians, teachers, and concert organisers. Their music inspired the work of many other composers, who held them in high regard. Their names may have been obscured from the present-day canon, but in their own era their influence was widespread.

To create a new canon, one that is truly representative of classical music history, we must acknowledge the great work, influence and importance of these remarkable women.

Correcting these continued biases is vital to unravelling classical music’s misogynistic past, understanding how our current thinking hinders progress, and finally, leading the way to a future industry that is both more vibrant and equitable.

We hope this article encourages you to explore these women in more depth, program them and record their music in your concerts. In addition we’ve included performance materials below to assist in your journey.

Piano Concerto in G Major. Score & Parts to Buy on Sheet Music Plus

Keyboard Sonata in A Major. Sheet Music available on IMSLP.

Harpsichord Sonata in A Major. Sheet Music available on IMSLP

Marianna Martines: A Woman Composer in the Time of Mozart and Haydn, by Irving Godt and John A. Rice

Also of interest: the story of Theresa Jansen, previously known as a pianist and the dedicatee of works by Franz Josef Haydn and others, who is now being recognized as a composer in her own right.