Hope your week is off to a great start! 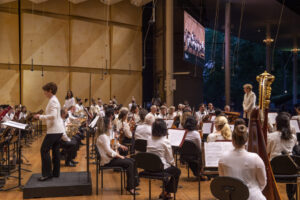 The continuing push for women conductors, and Marin Alsop’s role in supporting more recognition, training and opportunities for women in the field is noted in this review of the “Breaking Barriers” Festival at Chicago’s Ravinia. And also this one. Pictured, Laura Jackson, Jeri Lynne Johnson, and Alsop lead Michael Daugherty’s’ “Time Machine,’ which requires three conductors.

One of Alsop’s success stories is conductor Laura Jackson, who is starting her 14th season at the Reno Philharmonic.  An article in Forbes discusses her role and an innovator and leader, including her work commissioning a piece that engages with climate change.

We’ve reported on Smyth at Glyndebourne, but Smyth is also at GRIMEBOURNE (Arcola Theatre’s witty low-budget response to the hoity-toity-ness of that other festival) – a staging of Smyth’s openly feminist “The Boatswain’s Mate”  August 10-13 in London. 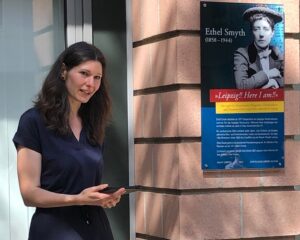 And speaking of Smyth – she studied in Leipzig, and now that city has recognized her! Conductor Eva Meitner led the movement to get Smyth commemorated in the city where she launched her career, and a plaque was unveiled on July 29!  Meitner reports on the event on her website, and provides the PDF of the celebratory speech she gave.

Did you get updated with our annual repertoire report on the top 21 U.S. orchestras?  While the Composer’s Diversity Institute had a statistic that was interpreted sensationally (also here), as representing an increase of 400% in the programming of works by women, our approach doesn’t find such startling changes.  Instead we see some small changes, but a lot of status quo and tokenism.

As I said introducing our Composer Of The Month, Gaziza Zhubanova “every time I learn about a composer I haven’t heard of, I am reminded that we still have so much we need to do!”  And here is one from a historic era and western European country that are familiar to me – and yet, it’s another completely new name!  A 3-CD set of music by the Paris-native Charlotte Sohy (1887-1955) is being released on a new label, and it includes an entire CD of orchestral music.  The label is La Boîte à Pépites (“The Jewel Box”) and it is a project of elles women composers.

What are you up to?  Listening to some great concerts?  Let us know!  info@wophil.org