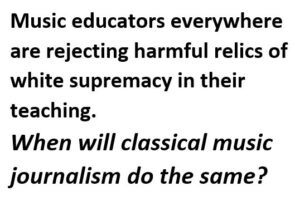 Musician and Educator Miriam Capellan published the letter below on her blog, Dear Clara.  Given the ongoing importance of the issues it raises, we are reprinting it here.  We offer a few comments following the letter.  Ms. Capellan offers these comments to frame her remarks:

This post was written following a Proud Boys demonstration in Washington DC this past November 2020. Inevitably, even more disturbing events have since unfolded in Washington D.C. including, the defacing of Black D.C. churches in December and culminating in the domestic terrorism carried out in the halls of the U.S. Capitol on January 6, 2021. Fueled by white supremacy and stoked by the outgoing one-term President, his supporters were merely continuing their consistently racist rhetoric and escalating attacks. Condemning these actions is not enough. We have to commit to stay vigilant. In our own professions, communities, and personal endeavors.  Let’s state firmly “white supremacy has no place here”.

On Saturday, November 14th throngs of pro-Trump protesters filled the streets of downtown Washington, D.C.  Convinced of voter fraud and emboldened by now-dismissed lawsuits brought by the president’s legal team, the crowds descending on the U.S. capital included a large presence of the hate group “The Proud Boys”. Footage of one proud boy initiation in a D.C. park shows a group of white men pummeling an initiate who shouts popular cereal brands in response. An initiator prompts him to declare, “I am a western chauvinist and I refuse to apologize for creating the modern world.”  (The disturbing link is here)

I wish that I could say I was surprised by this myopic ideology so proudly and publicly expressed. As a Washington D.C. resident, I was alarmed. As a music educator and consumer of classical music journalism, however, this unabashed declaration was all too familiar. While incidents of this kind appear extreme and spark outrage in liberal media such as The Guardian, they are connected with more subtle but nevertheless damaging manifestations of white supremacy in the cultural sphere.

The Guardian’s classical music series “Know the Score” perfectly expresses the unquestioned white supremacy and patriarchy in classical music of which many, like myself, have grown so incredibly weary. The latest in the series “Richard Strauss: where to start with his music” [link to archived webpage*] is the 20th article in the series and also the 20th white male composer to be featured. The myth that no historical women or BBIA/BAME composers existed has been repeatedly debunked. Yet, The Guardian’s series has chosen to continue the destructive and incredibly limiting narrative: that only white men composers are worthy of being entered into the classical canon, and that only white men composers are appropriate when initiating new members to classical music fandom. I’d venture to say most Proud Boys would agree. But to most leading scholars in the classical music field, this idea is almost as absurd as allowing a group of strangers to pummel you while screaming out breakfast cereal brands.

It would be utterly unacceptable for me, as a public school music educator to imply through misrepresentation that only white males can grow up to become composers. Music educators everywhere are rejecting harmful relics of white supremacy in their teaching. When will classical music journalism do the same? Leaders in the field of musicology have repeatedly expressed their concern about the omission of  BBIA/BAME and women composers from this series via emails and social media with little or no response from The Guardian. Like the Proud Boys on the streets of Washington D.C., it appears that The Guardian ‘refuses to apologize’ or rectify this problem.

*  Link to archived webpage is provided so as not to boost traffic to the original page.

One of the 45th President’s many notorious statements, was “We Write Symphonies,” described by Jonathan Capehart as “A familiar boast that swells the chests of white nationalists everywhere.”  No, Donald Trump has not written any symphonies; it is a claim as empty as the Proud Boys’ claim to have created the modern world.  When have any of these people ever done anything to build, enrich or appreciate any aspect of anything that can be called civilization?  And we might add, we really doubt that they have ever listened to a symphony.  No, symphonies and civilization are evoked as a symbol of power — elite, white, male power.  And with democracy under attack by those forces, it is more important than ever to call out the misuse of the notion of classical music as a creation solely of white males.

The Guardian article that Ms. Capellan responds to was printed on Nov. 18, and it was (as she states) the 20th in a series.  Continuing, with determination, their offensive trend, on Nov. 25 The Guardian published a follow-up article to their series.  It discussed 20 composers who were not included in the first series * — and guess what? Again all white men. Quite a bit of pushback from the Twittersphere, such as

While we applauded the Dec. 2 Guardian article “Without Ethel Smyth and classical music’s forgotten women, we only tell half the story,” it’s hard to see it as more than tokenistic salve.  And the elevation of 40 white males by The Guardian makes their own 2018 statement in support of diversity seem emphatically hypocritical — don’t their writers read their own paper? And if not, why should we?