We Hold On To Women’s Music History By A Thin, Fraying Thread

I began to fully grasp the dimensions of this issue: how much of women’s musical history has been lost—and thus how incredibly precious is what survives—while researching my graduate thesis on The Women’s Philharmonic.  Several anecdotes and experiences really drove home how we hold on to what remains of our precious history by a thin and fraying thread. I’ll share two here in this blog post. 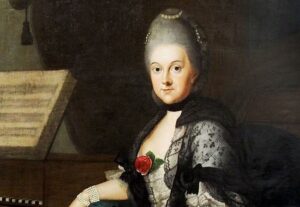 In 2000, New York oboist Sarah Davol was on tour in Germany. She visited the Anna Amalia Bibliothek in Weimar, Germany.  Anna Amalia (1739-1807), Duchess of Saxe-Weimar, was an important patron of the arts, as well as an accomplished composer.  At the Anna Amalia Bibliothek—which housed a million books, as well as thousands of medieval and early modern manuscripts, maps, and original musical scores—Davol discovered a copy of Anna Amalia’s “Sinfonia,” a previously unknown work. Davol photographed the manuscript pages.

Then, in 2004, a fire tore through the library. Before firefighters could quell the flames, thousands of books from the 16th to the 18th century, oil paintings, and most of Anna Amalia’s personal musical collection—which included her own compositions—were destroyed. Davol found herself in the unexpected position of having the only surviving copy of Anna Amalia’s “Sinfonia.” (Fasick 2008, 6; Grieshaber 2004; Tzortzis 2004) In 2008, thanks to Davol’s photographs of the score, the American Classical Orchestra premiered Anna Amalia’s “Sinfonia.”

A continent away, another case of the loss of source materials: During my thesis research, I found that certain books by women composers in my university’s (California State University, East Bay) library collection were vulnerable too—not to fire, but to culling. In 2014, when I began preliminary research for my thesis, I read composer Clara Kathleen Rogers‘ 1932 memoir, Memories of A Musical Career. When I brought it to the circulation desk, the person working there commented that I was the first to ever check out the book. Later in my thesis-writing process, I wanted to consult the book again. It was no longer in the catalog, and when I looked for in on the shelf in the library where I remembered finding it, the book was not there.

I spoke to the Coordinator of Access Services at the university library. She explained that the CSUEB library had engaged in “an extensive de-circulation process” the year before, pulling 80,000 books from the collection. Almost certainly, Rogers’s memoir was among them. I asked what was done with the culled books. The Coordinator explained that, mandated by California state law, they had been destroyed. (Why?!) She also stated that books were not culled unless they were held by another institution in the CSU library system, so that researchers could always access a given book through the Link+ system. However, when I checked that system for the book, I found two circulating copies—one at CSU Fresno; one at San Francisco Public Library—of Rogers’s 1919 memoir, but only one remaining circulating copy of her 1932 memoir—the one I was looking for that had been part of the CSU collection and now was no longer. That one remaining copy of the 1932 work was also held by the San Francisco Public Library. In fact, the CSU library system had destroyed its only copy of Rogers’s 1932 memoir, basically a sequel to her earlier book, which, unfortunately, had the same title as its 1919 predecessor. The later volume focused on her married life. For any researcher curious about how women in the first half of the twentieth century combined musical composition with family life, Rogers’s second volume was unique and valuable, its fate as a public resource resting in the hands of whomever at the San Francisco Public Library makes decisions about what should be culled or not.

These stories illustrate how tenuously we hold on to the artifacts of women’s music history. Single copies of music scores by forgotten women composers lie undigitized in archives, crumbling and ignored, vulnerable to assaults such as the Anna Amalia Bibliothek fire or to other ravages of time. Learning about these works and locating them represent extensive and time-consuming research undertakings. And sometimes, even when their whereabouts are known, acquiring a copy can prove complicated. For example, the published edition of Louise Farrenc’s Symphonies are both obscure and expensive, and these scores are found in only a very few U.S. libraries {in fact Women’s Philharmonic Advocacy is coordinating a new edition of her orchestral works].   And even an amazing piece such as Germaine Tailleferre’s Concertino for Harp and Chamber Orchestra (included on The Women’s Philharmonic’s groundbreaking 1992 recording) may be rented from its French publisher, but is not available for purchase (and thus is not found in any libraries).

So: What is to be done? This is not a simple problem, but rather a complex and often abstract issue: a gnarly knot of underfunding; an entrenched lack of appreciation for the importance of researching, locating, and performing the works of women composers throughout history; an outdated music education system that vastly weights the work of male composers; and an orchestral world with a paucity of women composers represented in programming. I see a few ways forward, many with roots in how we teach music, and understanding how education grounds the continuation of the classical music tradition.