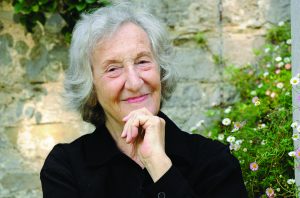 Conductors and Artistic Directors love celebrating composers anniversary years. There is always tremendous excitement around remembering the work of a beloved composer celebrating a milestone. (Any classical music enthusiast will have a hard time finding any ensemble NOT performing a work, or an entire program, in honor of Leonard Bernstein’s 100th birthday.)

This week ensembles in the United States and abroad will be honoring the life and work of Thea Musgrave, who will be celebrating her 90th birthday on Sunday, May 27. The Scottish-born composer, who has lived and works in the U.S. since the 1970’s, was a student of Nadia Boulanger and Aaron Copland, and was a celebrated educator as Distinguished Professor at Queens College, City University of New York.

A prolific composer, Musgrave’s oeuvre includes over a dozen operas, with several large works honoring the lives of powerful women of history (for instance, Mary, Queen of Scots, 1977, and Harriet, the Woman Called Moses, 1984). She has also composed many large works for orchestra, soloist and orchestra (nearly a concerto for every orchestral instrument!), and voice and orchestra – as well as many chamber works, pieces for a capella chorus, and electronic music. Find her impressive full list of works here.

The celebrations for this milestone began in February, when Musgrave traveled to The Royal Northern College of Music for a festival weekend of works for wind band and orchestra. The New York Virtuoso Singers will perform celebratory all-Musgrave birthday concert on May 27, including selections from her operas, and the world premiere of a new work: La Vida es Sueño. But even that is just the beginning – special events are planned in Wells, UK and by the BBC Scottish Symphony Orchestra in June, at the Edinburgh International Festival in August, and the Stockholm International Composer Festival in November. (The full calendar of events can be found here.)

Musgrave has been named the Artist Of The Week at OperaWire.com, is featured in the June 2018 issue of Gramophone, was interviewed by Alyssa Kayser-Hirsh at I Care If You Listen, and Richard Sasanow at Broadway World. Perhaps my favorite interview, however, was published in December by Frank Oteri at NewMusicBox ). Absolutely worth another read (and listen)!

It has been wonderful to see so much attention being paid to a living woman composer – and so much acclaim for her long and highly acclaimed career. HOWEVER — It seems as though not a single major American symphony orchestras got the memo about Musgrave’s big year. Perhaps they were all too busy coordinating no overlaps in all of the performances of West Side Story that audiences have heard throughout the season? What a missed opportunity!  It is great that some individual events are taking place, but it is inexplicable that no U.S. orchestra doing a major celebration. After all, she has had many notable American commissions, such as Turbulent Landscapes (by the Boston Symphony Orchestra who premiered it 2003), and her Pontalba (2003), commissioned by New Orleans Opera to celebrate the two hundredth anniversary of the Louisiana Purchase. Musgrave also has a long history of conducting her own works, and experiencing that role led to her confront the traditional power dynamics of the orchestra — her article in the New Grove Dictionary observes 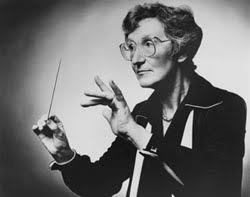 In an age that has witnessed a concerted attempt to demystify the orchestra through community and educational music schemes, Musgrave’s orchestral works seem increasingly prescient. For her, the orchestra as simply an efficient corporate machine holds little inspiration. Instead, she focusses on the players themselves, the challenges and rewards of group activity, combined with the exhilaration and fear in literally taking a stand.

That revolutionary approach is one that we would expect U.S. orchestras to celebrate rather than ignore.

As the week, and the year, progresses with more concerts and celebrations of an amazing (and continuing!) career, follow #Musgrave90 for updates on the latest news and events.

Do spend some time exploring some of her recorded works via Spotify: