Tanglewood — and Beethoven Idolatry — is Back For 2021

By Sarah Baer (with some input by Liane Curtis)

The Boston Symphony Orchestra’s summer home is getting ready to welcome guests again in what is perhaps an ideal venue for events in these strange times.  The traditions of lawn chairs and picnics while enjoying some of the highest-quality performances available in the United States will go on once again at the Tanglewood as some sense of normalcy returns to beloved ensembles and venues in the United States and abroad.

For 2021 there will be a reduced, six week BSO concert season running from July 6 to August 16, with the typical mix of classical and popular concerts that draw patrons to the Berkshire Hills.

As the classical music community as a whole is considering what the 2021-2022 concert seasons will look like – both in terms of logistics and in terms of programming – we at WPA wanted to look at the programming for this year’s Tanglewood festival to get a glimpse into changes that have come as a result of continued outcry about the lack of diversity and equity.  This problem has been discussed intensively over the past year in the classical music community.  What we find, especially coming out of one of the most historically conservative ensembles in the country, is disappointing but not surprising.

Throughout the coming six week season the Boston Symphony Orchestra (in a few instances, other ensembles) will perform a total of 65 orchestral works at Tanglewood.  Of those: 6 are by women:

Of the 65 works being performed, 8 are by Beethoven alone, Including three symphonies, two piano concertos, and his violin concerto.  Even in a short season, in a pandemic year which had no expectations or requirements attached, in which the rulebook was thrown out the window and free license was given for programming to be extraordinary, inclusive and exciting, Boston still turned to Beethoven more than anyone else.  Also the Beethoven symphonies and concertos are much longer than the works by women (although the length of the Langer Suite and the Williams Selections is not known).  The breakdown of orchestral performances looks like this: 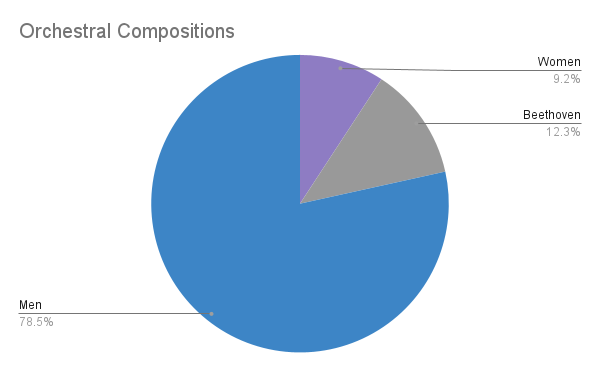 Despite this preponderance of Beethoven, the BSO bemoans not being able to offer its traditional Beethoven’s 9th Symphony as a season finale, since choruses are still a possible means of transmitting Covid 19.  Yeah, too bad, because the only thing better than more Beethoven than anyone else is still more Beethoven. Right.

There are also quite a few chamber performances this year, which makes sense not just financially but also logistically.  There should be little surprise that women are actually quite a bit better represented in the chamber music portion.  There are several reasons for this – one of the primary ones is that is has always been seen as more “acceptable” for women to compose chamber works, as they aren’t so “serious” or “strenuous” to compose as the larger orchestral pieces, nor so demanding of resources to perform.  It seems that this archaic thinking continues to hold true.  Of the 50 total chamber works there are 9 works by women. 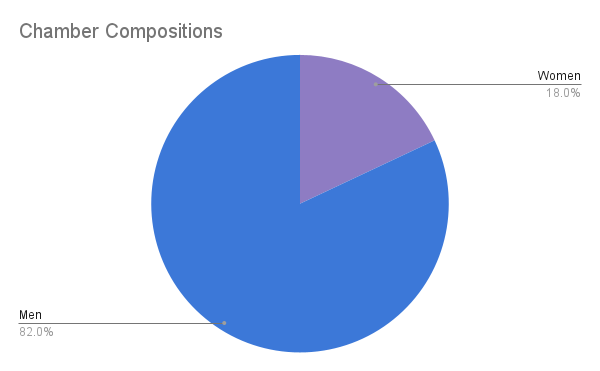 If this is taken as a look as to what the future might hold for Boston’s 2021-2022 season, which has not been released to the public as of yet, I am cautiously optimistic.  Though it is a far cry from equity in terms of representation of women or BIPOC, it is at least progress from the last several years of Boston’s programming.  For example, in the last “normal” season (2019-2020), the Boston Symphony Orchestra only programmed 5 works by women composers (out of 81 pieces throughout the season – 6%) and they were all contemporary, white women.  The programming at Tanglewood at least includes historic and contemporary women, as well as BIPOC.  While we might call this slight progress, it is perhaps more accurate to call it a tokenistic gesture, at best.

At the Society for American Music conference taking place currently, we heard a presentation yesterday “Orchestrating Whiteness: Ethnicity, Race, and Conceptions of Musical Value at the Boston Symphony Orchestra.” (by Prof. Ayden Adler of DePauw University).  “[Historicizing] the aesthetic sensibilities at the BSO sheds new light on institutionalized systems of whiteness that underpin American institutions of ‘high’ art.”  And as we observe, patriarchy continues to underpin the institutions as well.  For ensembles such as these to truly be welcoming to a broader range of future audiences, the predominantly white, male construction of “classical” music needs to be dismantled.