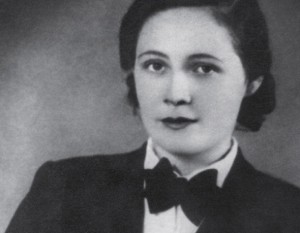 Once again, we are happy to welcome Quinn Mason (fresh from his Seattle conducting debut) as Guest Blogger!  He offers his insights on Vítězslava Kaprálová, in particular two of her orchestral works, Rustic Suite (1938) and Military Sinfonietta (1936-1937).

Vítězslava Kaprálová was born in Brno on January 24, 1915, the daughter of two musical parents (Her father, a composer and her mother, a singer). She therefore started her music education early and ended up at the Brno Conservatory as a double major in composition and conducting, graduating in 1935 at the age of 20. She continued her study at the Prague Conservatory from 1935-1937. Kaprálová’s most significant early successes came at this time, including guest conducting engagements with the Czech Philharmonic Orchestra In 1937 and with the BBC Symphony Orchestra in 1938. She then moved to Paris, France to further her study and it was here that she became a student of the composer Bohuslav Martinů, who became a major fixture in her life at this time. She was in the midst of become established in Paris, when she suddenly died in 1940 at the young age of 25, possibly from typhoid fever. (The website of the Kaprálová Society provides more details about her life).  Kaprálová was a prolific composer in her extremely short life, writing in virtually all genres including piano music, chamber music and orchestral music. We’ll be looking at two of her mature orchestral pieces.

Among Kaprálová’s extremely limited purely orchestral output are two compositions from the mid to late 1930’s, the Suita Rustica (Rustic Suite, 1938) and Vojenská Symfonieta (Military Sinfonietta, 1936-1937). The Suita Rustica is scored for a modest size orchestra (double winds and standard brass), while the Sinfonietta uses a slightly larger orchestration (triple winds, with the exception of four clarinets, six horns and piano).

The first piece, Military Sinfonietta, was originally written as a graduation assignment while she was finishing studies at the Prague Conservatory with Vítězslav Novák. The premiere was given on November 26, 1937 by the Czech Philharmonic conducted by Kaprálová herself, followed by a further performance at an international festival on June 17, 1938 with Kaprálová leading the BBC Symphony Orchestra. By all accounts, the first presentations of this piece were successful, even leading to publication during her lifetime, but it has unfortunately failed to enter the standard orchestral repertory. The work has been recorded thrice: once in the late 1950’s, again in the 1970’s and more recently in 2016. The piece is characteristic of Kaprálová’s early mature style, including expanded use of the orchestra and compositional techniques such as bitonality and extended form.

The opening, for example, is striking. Bold snare drum and trumpet fanfares instantly introduce us the martial nature of the composition. The theme in the violins that follows is characteristically Kaprálová, but might leave the listener wondering: what makes this composition military? It could be the ever-present snare drums, or the counterpoint with the trumpets.

Kaprálová’s extraordinary gift for orchestration is revealed in the second section, with pizzicatos in the cellos and basses with double tonging in the clarinets, complemented with harp arpeggios. This texture is unique as she breaks her theme up and passes it around the orchestra. What follows is a smooth and lyrical theme, which she gives to a combination of the oboes, clarinets and bassoons, giving us a reed focused sound that is rural in feel and flavor. We then find out way back to a fast 6/8 section, where Kaprálová further develops her violin theme introduced at the beginning. Here, she begins to get more creative with the orchestration, particularly with the dynamics of the winds and brass, and snare drum sprinkled throughout. It is Kaprálová’s use of the intervals of fourths and fifths that give this a piece an open and militaristic feel, although the title ‘military’ was added after the composition was finished. Kaprálová spends the rest of the piece developing these two themes she’s introduced, and even brings back and elaborates on the opening trumpet fanfare. The very ending, another fanfare in E Major, is triumphal and martial in character, eluding to a victory that follows the journey of the last 15 minutes of the masterful development of the composition.

The Suita Rustica was composed in 1938 on commission from the publisher Universal Edition. As the commission specified that it was to be completed in a short amount of time, Kaprálová sketched and finished it in a remarkable nine days. It was premiered on April 16, 1939. This composition is set in three short movements and focuses on music content closer to Kaprálová’s Czech heritage. Take, for instance, the opening movement, with a theme made up of 2nds stacked together. A striking moment that, again, is characteristic of Kaprálová’s style. As this is rustic suite, Kaprálová borrowed folk melodies from Moravia and Slovakia for this movement, as apparent by the mournful clarinet solo in the section. The second movement retains the mournful character, and it can be seen as a nod to her countryman, Dvořák. This is even more obvious in the second section when we have a furiant (a traditional Bohemian Dance) that bears resemblance to the Slavonic Dances of Dvořák and the dances from the Bartered Bride of Smetana. The lively third movement is Stravinskian, with the first theme (a traditional Bohemian theme) reminding one of Petrushka or any of Stravinsky’s neoclassical works. Kaprálová’s compositional style and prowess is on full display, the most impressive feature being the 4-part fugue. Of course, through all of these movement, Kaprálová’s orchestration is especially impressive.

There have been several efforts to preserve the life and music of Kaprálová, the most prominent of which is the Canada-based Kaprálová Society.  It offers much valuable information on her life and work, in addition to resources relating to women in music. In popular culture, Kaprálová makes an appearance in Season 3 of the web-series Mozart in the Jungle, as an obsession of one of the main characters. Neglected for some years immediately following her death, her compositions are seeing more performances and recordings.

The compositions of Vítězslava Kaprálová are as fascinating as her life story. As her music begins to get more attention, It’s my hope that her orchestral music in particular will appear on programs with more orchestras everywhere.