It’s once again Proms Season!  And that means it’s time once again to look at representation.  There have already been conversations about certain lacking aspects – not only the lack of women composers, but the overall lack of representation of people (including conductors) of color.  (See more at On an Overgrown Path: http://www.overgrownpath.com/2017/05/is-one-of-these-next-mirga-grazinyte.html) But here is our look and break down of who is, and isn’t, being heard.

There are 75 Proms, as well as several extra concerts, lectures, films, poetry readings, and other events.  We took a look at all of the music being performed as part of the numbered Proms (where the information was most readily available for composers, works being performed, and timings), as well as the un-numbered events (where information was available) and did some analysis of the works that will be heard this year.  Unfortunately,  not all of the concerts listed specific information – though, largely, the omitted performances are of what is largely considered popular music, not Western Art Music.  For an example, Prom 27 features the work of Ella Fitzgerald and Dizzy Gillespie, but no specific works are listed.

According to our counts, there are 243 individual works being performed in the 2017 season (some of which will be performed multiple times, but we didn’t include repeat performances in our counts), and the work of 118 different composers being performed – a total of 104 hours of music. 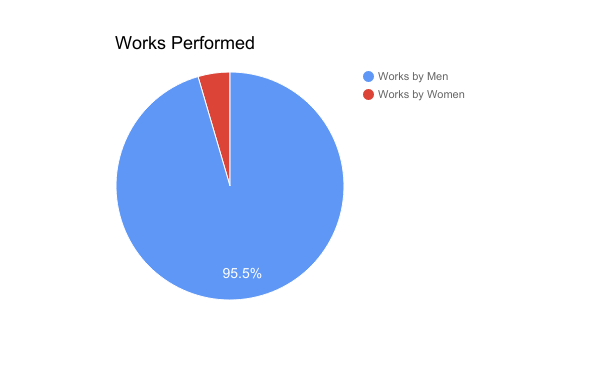 Of the 118 composers having works heard, 10 are women. 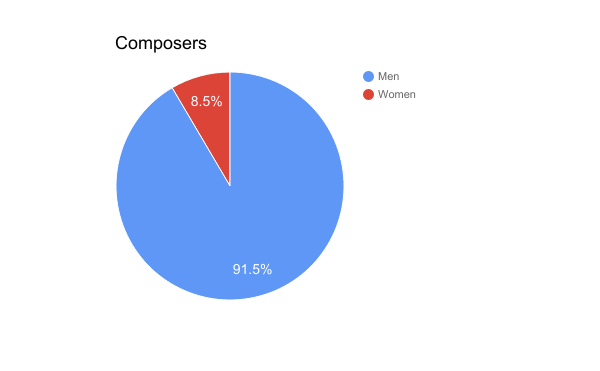 Of the 104 hours of music that will be heard this season, women’s music only accounts for a total of 2 hours.  In comparison, there are 4.5 hours of Mozart’s music being heard, and over 6 hours of works by Beethoven. 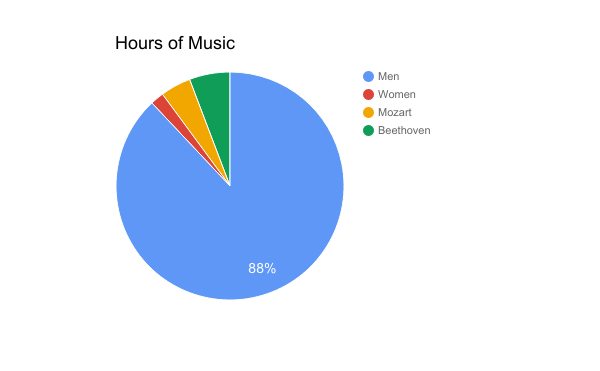 Though the vast majority of composers being heard are of the typical Western Art Music variety (meaning: dead, white men), all of the women having works heard are contemporary.  Moreover, apart from some important names (like Master of the Queen’s Music Judith Weir and Pulitzer Prize winner Julia Wolfe) there are several up and coming composers included.  What a wonderful opportunity to introduce audiences to new names, and music, especially when finding a place in the performing world can be so difficult.  Most of the works are also receiving some kind of premiere – and several works were commissioned by, or in conjunction with, the BBC.

That said, the total lack of historic women composers is (as always) disappointing.  This is especially true when there are so many fantastic works published and available, in particular of British composers.  Though there are certainly efforts being made, as evident in featuring Chineke! in Prom 62, there it still feels as the smallest effort, especially after so many continued conversations about the importance of representation on concert stages and in concert programs.

For now, have a listen below to the work of the women composers who will be heard this year at the BBC Proms: