The Other Mozart tells an archetypical story—of musical brilliance, ambition, dedication and talent—thwarted by oppressive and insurmountable societal factors. This vividly dramatized portrayal of Maria Anna (nicknamed Nannerl) Mozart, is a story of ambition thwarted and talent crushed.  Through Nannerl’s eyes we get a glimpse of what might have been—but wasn’t.  That Nannerl, like her younger brother Wolfgang, was a precocious talent is clear. But she faced limitations from earliest childhood, specifically because she was a girl. That the story is true—as is stated in the theatrical prologue—makes it even more powerful.

Author and actress Sylvia Milo is the creative force behind the 75-minute play, which has had several prior productions in Europe as well as the US and garnered rave reviews, earning a ‘strikingly beautiful’ from The New York Times. A musician and composer herself, the Polish-born Milo researched primary sources for years and drew heavily upon the Mozart family’s own words, set down in voluminous correspondence that documented their closeness and need for connection to each other, even when separated by travel.

To call this a “one-woman show” seems woefully inadequate and inaccurate, as Milo brings to life with such multi-dimensional physicality an array of characters: the stern Leopold; the dour, guttural mother; the bubbling Wolfgang and his chortling wife, Constanze; even a mention of Haydn. While the HERE Arts Center is an intimate venue, the intensity that Milo creates would carry to a larger setting as well; her presence gives power and momentum to this sweeping drama. 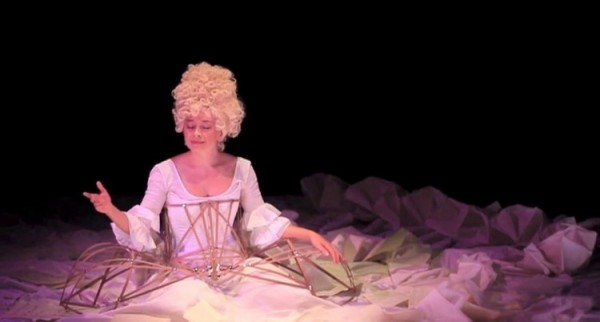 Sylvia Milo as Nannerl Mozart in the 18-foot-wide dress that serves as the play’s central metaphor.

The background soundscape for the play has been created by composers Nathan Davis and Phyllis Chen. They draw on a varied palette of percussive sounds—clinking, chiming, clanging—suggesting of clockwork mechanisms, a metaphor for social structures constructed with rigidity and continuing with inflexible inevitability, moving inexorably, immune to human emotions and desires.

That Nannerl wrote music, we know. None of it survives, but she plays a piece, described as her own, on a tiny music box, supportive by additional sounds. It is delicate and melancholy; Chen and Davis evoke a wistfulness, and Nannerl can then bask in the praise, the effusive praise recorded in a letter she receives from her brother: “My dear sister! I am in awe that you can compose so well, in a word, the song you wrote is beautiful.”

The 18-foot wide dress (designed by Magdalena Dabrowska from the National Theater of Poland) is the central prop, and metaphor, of the play. It serves, ultimately, as a restraint. But at first it is the canvas for her life, a back-drop, and multipurpose stage-prop. As young Nannerl, she does not yet wear it. Dressed in modest undergarments, she capers around it, pulls out objects from under and within its elaborate folds, and, jumps over and hides behind the corset frame. It serves as both a landscape and an interior.

At first young Nannerl enjoyed and benefitted from her ancillary status with Wolfgang. Her father taught them both, and they performed together on the harpsichord or piano.  For years, the family toured widely (Paris, London, Vienna, Munich), showing off the talents of both children. But once Nannerl was too old to be a child prodigy, this could not continue. With the family focused on climbing in social status, it was determined that she should be groomed for marriage.

In order to serve as an appropriate spouse, Nannerl was withdrawn from the public stage. Her distress at this loss of the exhilarating life a performer was visceral—months of retching and vomiting—as she was confronted with the end of her touring career. The curtailing of her horizons was a grim, even brutal development.  At home in provincial Salzburg, the sounds of ratcheting gears accompany the gesture of pulling the embroidery needle, in mundane repetitiveness; at the same time Wolfgang is being applauded in the great European capitals and having his operas commissioned and debuted.

The intersection of gender and class is sensitively revealed as a factor silencing Nannerl.  She exuberantly recalls composer Marianne Martines (1744–1812), who had autonomy and success: composing, publishing and performing, and who thus was an inspiration for Nannerl.  But this was possible for Martines only because of her inherited noble status and financial stability.  And Nannerl’s mother viewed Martines as a failure because she never married—her social status was only marginal.  In the background, we hear a piano performance of her work mutating into her grand symphony, showing that Martines had some traction even in the sphere of large-scale orchestral works.

Nannerl might have attained a success like Marianne Martines. But as a woman it is unimaginable that she would have ever reached the same level of success as Mozart. The Other Mozart is a poignant reminder that, for many centuries, and even millennia, one precondition to the status of genius was being male—and we have lost uncounted works of genius by that arbitrary fact.

And for Women’s Philharmonic Advocacy, the corollary realization is that we continue to be denied works by all of Mozart’s “sisters” if we ignore the output of the women who, despite the many obstacles, DID manage to write music and leave a record of their creative legacy. The Other Mozart will help to generate interest in the music of the female contemporaries of Mozart, and, in fact, a complementary pairing of a concert with the play (featuring composers such as Martines, Maria Antonia Walpurgis, Maddelena Sirmen, Maria Theresa Agnesi, Maria Theresa von Paradies, Francesca Le Brun, etc.) would be an exciting artistic offering.

The Other Mozart has now finished its New York City run, and will play in various European locations this summer.