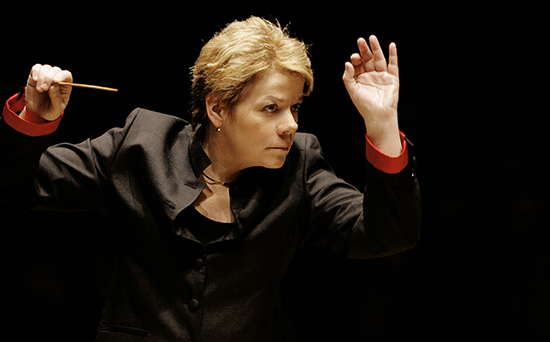 We in the United States are greatly anticipating Wednesday, January 20, which is inauguration day.  Though Washington D.C. will be missing the parades and festivities that are typically associated with the event, we can look forward to a performance of Copland’s Fanfare for the Common Man and Joan Tower’s Fanfare for the Uncommon Woman in honor of the event.  Marin Alsop, pictured above, will conduct members of players from the top orchestras throughout the country.  Learn more here.

Cincinnati Opera Center Stage hosts a discussion about inclusion, equity, and diversity in the arts, to be live streamed on social media on Thursday, January 21.  Learn more here.

Julie Ingelfinger writes for The Boston Music Intelligencer about why everyone should take the time to stream Cappella Clausura’s performance of Chiara Margarita Cozzolani’s Magnifcat.

Challenge yourself to Opera Wire’s opera composer quiz featuring women composers.  No doubt everyone will come away with more to add to their playlists. OK, quizzes are always a little silly, but we did have fun AND learn something new here!

Composer Paola Prestini and Grammy nominee Magos Herrera are interviewed at radio KUNM (from the University of New Mexico) about their collaboration.  Listen in on the website.

We’re sorry not to offer much in celebration of Martin Luther King Day.  But the Chicago Sinfonietta has announced their annual MLK Tribute Concert which will take place on March 28.  The Bennington Museum offered this chamber concert including music by Florence Price and Jessie Montgomery. The London The African Concert Series for 2021 is announced.

So much going on!  We’d love to hear from you!  info@wophil.org  And do you have our 2021 calendar? Available here!  Celebrate women composers every day!!