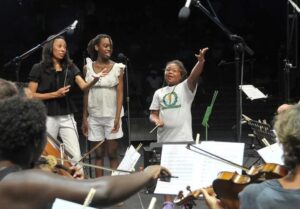 Africlassical blog brings us lots of good news!  We always love hearing what Jeri Lynne Johnson and Black Pearl Chamber Orchestra are up to (pictured, Johnson at left leading a workshop) – fantastic news that they have been awarded a Mellon Foundation Grant for their “Kaleidoscope Initiative” to support the next generation of rising young composers, especially composers of color.

And also exciting news that Jonathon Heyward has been appointed music director of the Baltimore Symphony  Orchestra, becoming the only Black conductor of a top-tier U.S. orchestra.

The Cabrillo Festival is one of the leading Festivals of Contemporary Music in the U.S. and the world.  But if you can’t make it to Santa Cruz, CA in person, they are continuing their pandemic-era practice of streaming some events (and leaving some on their website).   This website has their schedule; make sure to sign up for email notifications to learn about streaming the rehearsals and discussions.

I’m listening right now to the July 24 rehearsal of Jesse Montgomery’s “Soul Force” and Gabriela Lena Frank’s “Contested Eden.” I found the link on the Cabrillo Festival Youtube Channel – it is always exciting to hear musicians working to bring a piece together!

Sat. July 30 will feature a Meet the Composers discussion, with featured composers including Stacey Garrop and Paola Prestini, moderated by Music Director Cristian Măcelaru.  It is followed by a concert including Garrop’s “The Battle of Ballot,” and Prestini’s piano concerto “Let Me See the Sun.” (It doesn’t look like the concert streams, but maybe it will be available later?)

The Cabrillo Festival continues to Aug. 7, we will report on it again next week!

ICYMI (In Case You Missed It!) – In May, the League of American Orchestras unveiled an initiative to have a consortium of 30 orchestras perform newly composed works – all of them by women.  This is to give the works a chance of getting beyond the premiere – the big splash of the first hearing — which for many new works is the only hearing.  And in June, The Composer Diversity Initiative announced that orchestral programming is becoming more diverse – “protests over racial justice and gender disparities in the United States appear to have prompted some change.”  While we applaud these changes, we want to know they will truly be lasting change. AND we want to make sure that unjustly neglected composers of the past can also be included.

And finally – ICYMI – the Kaprálová Society Journal always has a lot of fascinating and important reading material, and they really hit the jackpot with their issue of Fall 2021, with reviews of books about composers Madeleine Dring, Joanna Kinkel, and Mabel Daniels (here are links to the books on Dring and on Daniels.)  Dring and Daniels both wrote orchestral music that needs exploration and programming, and Daniels is fascinating as part of the same group of Boston composers as Amy Beach, only coming at the end of the age spectrum of that group.  The reviewer (Sarah Baer) notes: “the performance of Daniels’ Deep Forest… in the mid 1930’s was the last work by a woman composer to be performed by the Boston Symphony Orchestra for nearly another 50 years” – a stark reminder that progress is not a constant, but rather a continuous struggle with successes happening in waves – waves that are not the product of nature, like the oceanic kind, but rather that are the result of human labor and intent.

Well, enough talk about waves!  Hope you are having a great summer!  Drop us a line info@wophil.org