I was thrilled to hear NPR reporting on a woman composer on All Things Considered recently. Celeste Headlee spoke with Louise Toppin, opera singer and voice professor at the University of North Carolina, on the life and work of Margaret Bonds.

Bonds, who died in 1972, would have celebrated her 100th birthday on Sunday, March 3. The story recognized her work, music, and collaborations (like with poet Langston Hughes and soprano Leontyne Price), and highlighted that Bonds was one of the most recognized female African-American classical composers of her time. And, like too many other women, her work is little-known today. 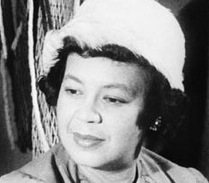 Among her accomplishments was being the first African American to perform with the Chicago Symphony (as a solo pianist during her senior year of college, no less!) She was also a student of Florence Price, who helped pave the way for women and African Americans in the classical music scene.

Last weekend a symposium was held in honor and memory of Margaret Bonds at the University of North Carolina. It was co-hosted by UNC and Videmus, a non-profit organization “committed to educational and collaborative projects on the repertoire of African Americans, women, and under-represented composers through the promotion and production of recordings, concerts, and other programs.”

Kudos to UNC and Videmus to what appears to be a fantastic weekend of shared music remembering the work of Bonds.

Be sure to listen to the whole story archived on NPR’s website which includes excellent examples of Bond’s work. But the most poignant part of the conversation happened at the very end:

HEADLEE: Describe for me that moment when you were 10 years old and your piano teacher sets a piece of music before you that’s not Bach and is not Mozart and wasn’t written by somebody from long ago or who looks nothing like you but was another dark-skinned American woman. What was that like?

TOPPIN: The fact that I can remember, it tells you the impact that it had on me. I was floored. It set me on the path to find out more about Margaret Bonds, believe it or not, as a child. So that pride and that interest in her started my path of looking for more of her stuff but also looking for women composers and recognizing that they are a rare commodity, but they have a voice in our musical culture and musical life. And she made very strong statements with the music that she wrote.

And isn’t that the point of it all? Shouldn’t more students be exposed to music as varied and diverse as they are? Though the “great masters” will always have a place in the repertoire, we cannot begin to measure the tremendous and positive impact of a young student having the opportunity to learn about and perform the works of a composer that they can relate to on a personal level. Insisting that students only learn the music of dead, white men just continues the false notion that the only “good” music was written by dead, white men.

Here is Bond’s “You Can Tell The World”: