Today is the Feast day of one of the best known women composers – and, typically, the only one to be included in a music history textbook – is Hildegard of Bingen. 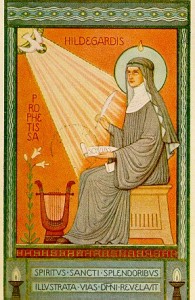 A 12th century abbess in Germany, Hildegard is remembered for being one of the first women to stand up against the Catholic Church and be heard.  A composer, mystic, and healer, her work continues to inspire renewed interest in contemporary scholars and theologians.  In fact, one of the few publishers who devote their catalog to works by women composers, Hildegard Publishing, is named for the abbess.  Her life recently inspired a movie, Vision, from Zeitgeist Films.

Though referred to as a Saint by some parts of the Catholic Church, Hildegard wasn’t officially recognized until 2012, and even then as “Doctor of the Church”.

Here are two podcasts about Hildegard, her life, and music.  The first from Bellatrix Musica, produced by WUOL from Kentucky:

The second is a bit more extended conversation from BBC’s In Our Time: