This year marks the 125th anniversary of the BBC Proms, and in true British fashion, the organizers have kept calm and figured out a way to carry on even during a pandemic.  Though the Proms will be very different than in years past – with performances of archival recordings over the history of the Proms being rebroadcast in lieu of live performances – it will still be a way for music enthusiasts in the UK and around the world to participate in the collective experience.

Organizers have announced that archival performances will be available on television and on BBC Radio 3 beginning July 19, and those of us in the United States will be able to tune in through the BBC Radio 3 player.  The final two weeks of the festival will, with any luck, include live performances at Royal Albert Hall, including the Last Night of the Proms.  Few details are being released yet, however, due to the ever changing world we are living in and concerns about travel arrangements for performers, regulations that might or might not, be in place at that point, etc. etc.

Considering the solidarity felt around the world with the Black Lives Matter protests, as well as the continued attention that has been paid since the #MeToo movement first encouraged more inclusion of underrepresented women, we might be hopeful that the organizers of this year’s festival will take this opportunity to hand pick from the archives works that speak particularly to this moment in time.  There have been recent performances of works by Eleanor Alberga and George Walker that could easily be included in the rebroadcast concerts, for example.

It seems, however, that this is not at all the case.  And though I cannot say I’m surprised, I am deeply disappointed.

Though the full list of programming for the 2020 Proms is not yet available, what can be seen on the Radio 3 website regarding their upcoming Proms broadcasts will only reassure listeners who want nothing more than to stick to the most popular works in the canon.

From July 17 to July 24 (the only dates available at the time this was published) listeners will be awash in Beethoven which, to be fair, the organizers promised in honor of Beethoven’s 250th birthday – as if there needs to be more attention paid to Beethoven this, or any other year than what is already paid by administrators and conductors the world over.

It is perhaps even more frustrating as the BBC Proms has a long history of inclusivity, as demonstrated in the archival information that is available on the Proms website.  In the earliest years Sir Henry Wood saw to it that works from contemporary composers from the UK and beyond were heard – including many works by “lady composers.”  Though not necessarily large orchestral works, concerts of art songs and chamber works were regularly featured works by women composers.  Simply scrolling through the complete list of composers heard at the Proms will demonstrate just how inclusive the concerts were.  The Proms were a celebration of contemporary music, of the works and performances of new and underrepresented works, alongside the fan favorites of the standard repertoire.

The Proms concerts were created to be accessible – with lower priced tickets, food, drink, and smoking allowed from the earliest days, they were a way for the working class to enjoy a night out and take in music that they might not otherwise readily hear.  But that spirit is largely gone.  Instead of pulling out underrepresented works, or highlighting up and coming composers, much of the attention is on celebrating the so-called “great masters” and continually repeating the works that to some are beloved, but to others represent entrenched (and monotonous) traditions of exclusion

More can and should be done to rekindle the original spirit of the Proms concerts.  To include performances of works by Beethoven, but also of the composers whose names are not readily known.  For example, according to the Proms website, Samuel Coleridge-Taylor’s works were performed in 127 separate events in the 125 year history of the Proms, almost entirely during his lifetime or shortly thereafter.  The London-born composer, pictured below, composed prolifically throughout his lifetime and his works were celebrated in Britain as well as in the United States.  Clearly, his works were in demand and popular to be performed so often in the history of the Proms.  But can we even hope that some of his works will be included in this year’s hand-curated programming? 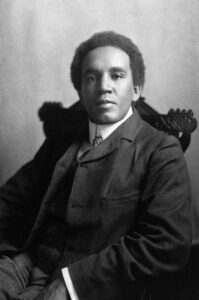 The history of these composers is the history of the Proms.  Beethoven and Brahms, but also the women who composed art songs and chamber works, the people of color who composed to include their musical experience and traditions in the scope of classical music.  To be true to the spirit and history of this institution is to be truly inclusive, to have concert programming that demonstrates the width and breadth of classical music as it stands now.  That cannot be done by simply repeating the composers and works that have been performed countless times before.

As the whole world is on edge and caught between where we’ve been and where we’re going, all institutions need to look at their place in time and decide where they want to be as we enter a new space for live concert music, and for coming to terms with the effects of institutional racism.  The Proms, it would seem, would do well to learn more from their past as they carve fresh ways to move ahead.

Learn more about where, how, and when you can tune into the 2020 Proms on the official website.  We will post more information about which composers are included, and which are ignored, as more information becomes available.