We rarely blog on the weekends, but we wanted to make sure we mentioned the performance tomorrow (Sunday, Oct. 9) in Australia of Ethel Smyth’s Mass  — it may in fact be the first performance of that monumental work in Australia, and it is very a rare all-Smyth concert (including overtures from her opera The Wreckers), taking place at the Hawthorn Arts Centre, in Hawthorn (near Melbourne). 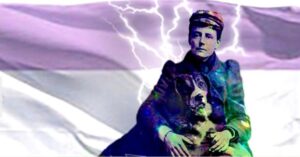 As we’ve mentioned, Smyth’s stock is rising and rightly so. More events demonstrating this growth in recognition: the recent performances in the UK of her Mass, The Wreckers, and other works, and the performance of The Wreckers in Berlin, which will be broadcast on German radio, (streams Sunday, Oct. 9).

Also, upcoming performances of The Wreckers at Houston opera (opening night is Oct. 28), and performances of Smyth’s fifth opera (1923), Fête Galante, at the Guildhall School of Music (London) in November.