Ruth Crawford Seeger’s Andante for Strings — and a problematic publisher

Welcome to our Guest-blogger, Ian Sewell, a PhD Student in Music Theory at Columbia University. We thank him for sharing his experience about one of the 20th-century’s best- known works by a woman composer, and the difficulty in making an accurate and scholarly edition of that work available. 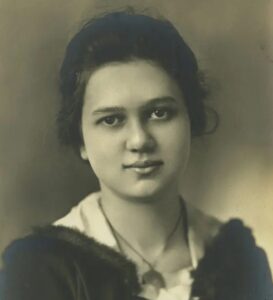 Scholars of Ruth Crawford’s music are all too familiar with the story of her being shut out of the founding meeting of the New York Musicological Society, to avoid the implication that musicology was—to quote Crawford’s husband and mentor Charles Seeger—“woman’s work.” And recently, as this post discusses, a parallel tale of exclusion has emerged around the publication of Crawford’s most well-known work, the slow movement of her magnum opus, the String Quartet 1931, and the string-orchestra arrangement based off of it, Andante for Strings.

This Andante began life as the slow third movement of String Quartet 1931, which Crawford started early in 1931 while living in Berlin on funds provided by her Guggenheim Fellowship (she was the first woman to receive this prize). The quartet received its premiere in November 1933, after Crawford’s return to New York, and to a large extent the recognition she received on the basis of this performance was the catalyst that elevated her from obscurity in the American contemporary music scene. It was the Andante, in particular, that aroused the most interest. Henry Cowell—a composer, pianist, and theorist—was exceptionally impressed upon hearing the movement, holding it in the highest esteem and writing (rather gushingly) that it was “perhaps the best thing for quartet ever written in this country.” Cowell organized for the movement to be recorded by the New World Quartet in December 1933—although Charles Ives, who was funding the recording, worried that Crawford’s music might not be “mansize”. Later, in January 1941, Cowell published the score of the entire quartet as editor of New Music (also known as New Music Quarterly).

Thanks to this exposure, the Andante movement received considerable attention from musicians and music lovers of the time. Glowing reviews came in from critics. Harrison Kerr, writing for Trend, called the piece “an outstanding example of [Crawford’s] creative work to date,” while Irving Kolodin from Modern Music heralded the recording as a landmark for the distribution of contemporary music, since hardly any were available at the time. Later commentators, including composer George Perle, regarded the work as an important precursor to future musical developments such as serialism. For music theorists Nancy Rao, the thick texture and winding lines of Crawford’s movement “suggested a whole new way of listening” which broke with tradition and pointed the way to the future.

But Crawford herself was not so easily satisfied. She thought the New World Quartet’s performance too slow to project the piece’s long melodic line that wandered from instrument to instrument. Accordingly, she changed the tempo marking in the score, yet she still remained dissatisfied. According to Judith Tick, a scholar of Crawford’s life and work, this problem was the stimulus for the string-orchestra version. “Acknowledging how difficult the internal line was to project,” Tick writes, “[Crawford] made an arrangement for orchestra, to impose a conductor’s discipline on the score.” The result is the standalone string-orchestra piece, Andante for Strings.

The chief difference between a piece for string quartet and one for string orchestra is not just the number of instruments. The presence of double bass in the latter group meant that Crawford needed to add a new instrumental line to the texture, and it is here that the piece’s publication starts to become problematic. Cowell’s version was for quartet, and indicated simply that “A double-bass part is available for performance of this movement by string orchestra.” The double bass part was first seen when the rights to the piece were taken over by Merion Music Inc., and Cowell’s materials were republished (without editing or proofing) by the Theodore Presser Company. Curiously, Presser’s score is a printout of Cowell’s 1941 engraving with a handwritten double-bass part added in. Even more curiously, this handwritten part asks the double bass to be silent for two thirds of the movement, before appearing rather abruptly from nowhere.

This version has been sold, performed, and recorded several times. Its authority was not questioned by scholars until a recent encounter of mine at the Library of Congress. Among facsimiles of Crawford’s own materials pertaining to the Andante, I discovered her sketches for the string orchestra’s new double-bass part. One version, annotated “Keep — bass added,” remains incomplete and seems to represent an abandoned first draft. The second version, which Crawford labels as “amended bass part,” is much more fully and carefully written out, and seems to be the final version. The problem, however, is that Presser’s version does not correspond whatsoever to Crawford’s final version. Instead, material from her incomplete first draft was used, and only the final section of that incomplete draft was printed by Presser—accounting for the bass’s bizarre absence in the first two thirds of the piece. In other words, Presser’s score has most of the double-bass part missing, and the remainder incorrect.

When I initially contacted Presser about this issue, they did not seem interested in correcting their error. Even at the behest of Professor Ellie Hisama, expert on Crawford and her music, they continued to publish the flawed score. Only after I got in touch with the Philadelphia Orchestra, who were at the time renting the score from Presser, did any interest start to develop. The orchestra, performing under visiting conductor Michael Tilson Thomas, naturally wanted to work from Crawford’s intended version, and so they asked Presser to prepare my corrected score for their use. The true premiere of Crawford’s Andante for Strings was then given in early 2017, incorporating the material from the Library of Congress.

Despite this, Presser still seemed uninterested in publishing a corrected edition. However, I later learned, they had retained my files from the Philadelphia performance and were now hosting them online, providing them to their customers. With the help of Professor Hisama, Joseph Straus (another Crawford scholar) and Barbara Mackenzie (executive director at RILM), I obtained the services of a pro-bono lawyer, which ultimately resulted in me signing a contract with Presser. I wanted no money, just an acknowledgement as editor and assurance that the correct score would finally be made available, and this was agreed to by Presser. Shortly after signing, however, both Presser’s legal counsel and president broke contact with my lawyer and me, despite ongoing attempts to get in touch. I do not know if they are distributing the correct score, and I do not know if they are still presenting the edition as their own work.

This story represents one person’s (still ongoing, and by no means necessarily successful) effort to have one score by one woman amended, and so far it has required a cast of characters to overcome all the obstacles put in the way by a status-quo system of publication. While scholarly work on music by women abounds in newer methods of hermeneutic interpretation, there still remains much archival and empirical work to be done in the area, and this research needs, further, to be made available through the publication and re-publication of scores. If, as Judith Tick says, Crawford’s and indeed other women’s “place in music history is being secured through the most powerful tools in higher education—textbooks and … anthologies,” then it is imperative that high-quality, critically-edited scores are available to scholars, performers, and listeners. It seems that the moral of the above story is that we — concerned and educated listeners, and organizations such as Women’s Philharmonic Advocacy can’t depend on entrenched publishers to make such availability a reality.