Women’s Philharmonic Advocacy is excited to be once again offering the Performance Grants to help orchestras (professional, community, and youth ensembles) include works by women in their concert repertoire.  We recognize that the lack of representation of women in concert programming, and the lack of diversity in general, is due in part to the limits of annual budgets and the current holdings of the ensemble’s library and are happy to help provide means to explore new repertoire.  We are looking forward to reviewing the grant applications and to support innovative programming!  To help stir the creative juices for what works may be an excellent addition to an upcoming concert program, we’ll be highlighting different pieces through this blog.  (Note: none of the suggested works are a requirement to receive the grant.)  And if you haven’t done so already, spread the word and encourage your favorite ensemble to submit their application for the 2014 Performance Grants!

The first piece that deserves some long overdue time in the spotlight is Louise Talma’s Toccata for Orchestra.  The piece, which was written in 1944 and is an example of her neoclassical writing, incorporates elements of Jazz and Americana in Talma’s compositional style.  Though it was highly praised by critics during Talma’s lifetime, there are few recordings.  (One is available in “print on demand” through Amazon.)  The work is available to rent through the Theodore Presser Company. 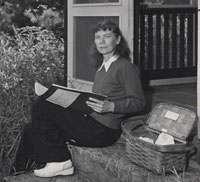 Talma at the McDowell Colony, ca. 1948. Image from the Library of Congress

Talma (1906-1996) was an American composer who worked and lived in New York City.  A student of Nadia Boulanger, Talma explored both neoclassical and twelve tone compositional styles during her career.  Her compositions were acclaimed during her lifetime and she often spoke about her work – one example of such an interview can be found here.  A new biography of Talma (Louise Talma: A Life in Composition) by musicologist Kendra Preston Leonard has just been published.  You can see Leonard’s lecture about Talma’s life and works though a recorded Library of Congress webcast below: