Opening Night at the Boston Symphony 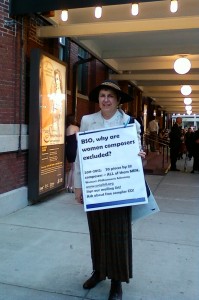 And I handed out a flier (200 of ’em!).  It’s amazing how some people look right through you when you are trying to hand them something. Others were, of course, full of interest and enthusiasm! I met some very kind people! And I met BSO artistic administrator Tony Fogg, who I had written back when I wrote James Levine and Mark Volpe in 2008 (and several times after that). He said that he had written me back a lengthy reply, but I never received it.  Too bad to have a miscommunication, I will try again … and again …