It wasn’t that long ago that the question of authorship for the Cello Suites – and the idea that they were written not by Bach but (gasp!) his wife – stirred up musicologists, music journalists, and any music enthusiast with their two cents to add to the conversation.  (We wrote about it here.)  And while the dominant voice in all of those conversations was of skepticism that Anna Magdalena could have possibly penned these famous works, those of us who advocate for the works of women, who have only recently in history been granted the opportunities to even be educated in composition and struggle to have their works heard, were glad that questions were being raised. 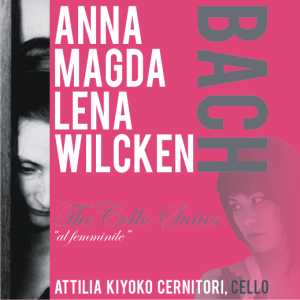 I am also thrilled to see that these questions may have helped inspire others to continue to address the problem.  Most notably by Italian cellist Attilia (“Tilly”) Kiyoko Cernitori who just released a CD of the Cello Suites listing Anna Magdalena as the composer.  All proceeds from the sale of the CD will go to support a domestic violence shelter in her community (in Florence, Italy).

Cernitori explains in the press release that:

I thought the story of Anna Magdalena was a bright example of the spiritual counterpart of the physical violence against women. A subtle, silent violence that often oppresses and denies women to express their talents. A message of hope from the city that gave birth to the Renaissance, hoping for a new Renaissance with gender equality.

Here is a video that includes part of the recording and addresses the reasons why it was created:

You can purchase the album through iTunes.