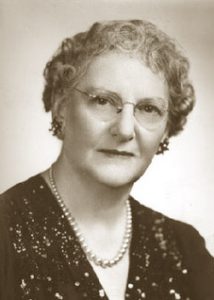 More good news! ….  And some silliness!

Marion Bauer’s Symphony n. 1, one of the last works she composed,  will receive its long delayed  premiere on Nov. 15 by the Seattle Collaborative Orchestra. Bauer’s Symphony composed in 1951, was scheduled to be conducted by Howard Hanson at the Symposium of American Orchestral Music at the Eastman School of Music in Rochester, Symphony, directed by Howard Hanson.  Unfortunately, problems with the copies of the parts thwarted those plans and Bauer died suddenly of a heart attack in 1955.  Anna Edwards, Music Direvctor of the Seattle Collaborative Orchestra, had been planning a premiere of the work when the Covid pandemic struck, so we are happy that it is happening now! Another premiere performance took place a few weeks ago with Symphoria (in central New York state), led by Heather Buchman, on a program called “Unheard No More!”.  We are calling these co-premieres, since their planning overlapped, and they are so chronologically close — after all, this is not a footrace!  (Co-premiere was the term used when Ethel Smyth’s “The Prison” was performed by two ensembles in proximity.)  And both these Bauer concerts are performances are exciting and historical landmarks.  The central hero in recovering so much of Bauer’s neglected work (as well as writing a biography of Marion and her musical sister Emilie Frances) is Dr. Susan Pickett, who has researched and championed her for many years.

Van has this completely silly article — “The Sex Lives of Women Composers, Ranked.”  I guess it means something about the recognition of women composers in general that we can now have this kind of goofiness that “great men” have often experienced. STILL  — we wish the article could list its sources for the framework of factoids that are present!  Hmmm, inquiring minds want to know!

And Monday (Nov. 7) was the birthday of composer Ruth Lomon (1930-2017) who was not only an innovative and visionary creator, but also collaborated extensively with organizations promoting women composers, including American Women Composers, and the International Association for Women and Music (IAWM, which AWC became part of), and the Women’s Studies Research Center of Brandeis University.  I-Resound Press has scores and recordings for many of Lomon’s works including Terra Incognita (for orchestra) and her Bassoon Concerto (1979).  A monumental late work is the oratorio Testimony of Witnesses (2008), setting poems by victims of the Holocaust. It has yet to be performed in its entirety, although sections were performed by the choral ensemble Boston Secession (a movement is here on Spotify).

So much is going on!  Let us know what’s on your mind!  info@wophil.org