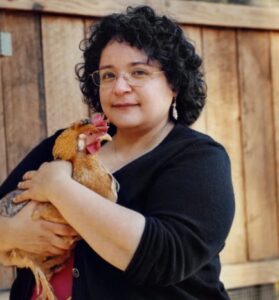 The New York Times profiles Gabriela Lena Frank (pictured), composer and educator who works to encourage inclusion and representation in the field of classical music.  She hosts an academy on her farm in California, that works with composers, including those whose background is not that of the traditional Western, Conservatory-based practices, such as Anjna Swaminathan.  Frank is the recipient of a Heinz Award.

Conductor Roderick Cox is scheduled to debut with the Fort Worth and Dallas symphony orchestras later this month.  Read about Cox and his work towards representation for Black musicians in American classical music at the Dallas News.

Chris White writes at Slate about the need for “fullnaming” all composers in classical music.  We need to identify and eradicate inequity no matter where we find it, including in the way we list names in the concert programs.  Follow the link to read more about this idea, and more ways to work towards equality in classical music.

And NPR has a story about a new project from composer Ellen Reid.  Soundwalk is a GPS-enabled app designed to accompany walks around Central Park in NYC.  Read on here, or listen in below:

Learn about the work of Irish composer and vocalist Jennifer Walshe in a piece by Alex Ross in The New Yorker.  Ross describes his first experiences with Walshe’s works, and his reactions to her latest project.

More opera: The Royal Opera House in London presents The New Dark Age, features Hannah Kendall’s opera The Knife of Dawn, about Guyanese poet Martin Carter; in the second half, compositions by three leading contemporary composers (Anna Meredith, Missy Mazzoli and Anna Thorvaldsdottir) are reworked into a 10-part song suite that works as a poetic response to pandemic life.  The Guardian reviews, here.

What are you reading?  What did we miss?  Let us know at womensphil@gmail.com