Funny thing – as more women musicians are being asked to listicle their favorite pieces, more works by women are being noted and gaining some much deserved attention.  Take, for example, the recent article in The Guardian by saxophonist Jess Gillam who includes in her top five classical pieces Nocturne by Dobrinka Tabakova, as well as Night Ferry by Anna Clyne. 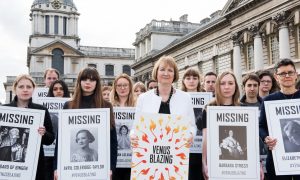 Also in The Guardian is an editorial by Harriet Harman on why she championed programming a season at Trinity Laban Conservatoire with fully half of the composers being women.

Kendra Leonard writes at NewMusicBox about the ways in which silent films are being re-scored by contemporary musicians and how the musical score changes the interpretation of the on screen action.

It was announced that the publisher G. Schirmer has taken up the catalog of music by Florence Price.  The Women’s Philharmonic led the rediscovery of Price’s music with their pioneering CD of 2001, featuring Symphony no. 3 and “Mississippi River.” Sadly, the disc is no longer available, but the recording can be downloaded. And then in 2011, the Center for Black Music Research  released a recording of Price’s Symphony No. 1, and her Concerto in One Movement for piano (1934).  We have noted other steps in the recovery of Price’s music on our blog — performances led by Maestro Mei-Ann Chen, the Festival of her music at the University of Arkansas, and the documentary that aired on PBS.

And don’t forget that tomorrow is #GivingTuesday!  There are many organizations doing great work to level the playing field for women in music! Consider a donation to Women’s Philharmonic Advocacy, becoming a Patron of Listening to Ladies, supporting the work of Women Composers Festival of Hartford, or buying something from the Music Theory Examples by Women shop!  (Who did we miss??  Leave a comment and let us know!)

Make sure to let us know about what you are listening to, and any other news!  Email  info@wophil.org