The Library of Congress blog, In the Muse, highlights Women Composers Hiding in Plain Sight. Written by Music Reference Specialist Melissa E. Wertheimer, she discusses a fantastic photograph she found, and the backstory she uncovered, in the Library of Congress archives!  (Spoiler: the photograph and story features one of our favorite composers, Amy Beach, as well as an early example of women composers coming together to organize and support each other!)

On An Overgrown Path discusses the institutional discrimination faced by conductors – and specifically the case of Rudolph Dunbar, the first black conductor of the Berlin Philharmonic whose career was limited because of the color of his skin.

The Women Composers Festival of Hartford, which has been highlighting the work of women in music since 2001, has just announced the opportunity to support the organization in a new way.  Supporting WCFH by becoming a member means you will receive advanced, and reduced, ticket prices to the annual Festival, and your name (and website) will be listed on the Festival website. 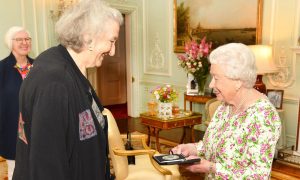 Celebrations for Thea Musgrave’s 90th birthday are continuing, with many eager to extend birthday well wishes – including Queen Elizabeth II!  Musgrave was awarded the Queen’s medal for music as the 13th recipient since it was founded in 2005.  Read on here.

It was just announced that the Welsh National Opera is beginning a new program that will award one aspiring woman, age 19 to 35, a conducting residency.  With the intention of working to rebalance the gender divide in the classical music world, the residency with include mentoring and opportunities to work with the WNO Orchestra with different styles of repertoire over 18 months.  More information is available here.