The mission of Women’s Philharmonic Advocacy focuses on leveling the playing field for women composers.  The inequities are obvious in our oft-quoted statistics that show the prolific accomplishments of women composers who still do not receive the attention that is due to them.

Issues surrounding women performers are really not so much in our radar.  It was one of the big issues back in 1981, when our “mother” organization, The Women’s Philharmonic was founded.  By the time the orchestra disbanded in 2004, huge progress had been made for performers.  Women were represented in every instrument and at every level of orchestra.  Really, we liked to think that problem has been solved.

But this week a story broke that reminded us that female performers still face discrimination.  It was national headlines when principal flutist of the Boston Symphony, Elizabeth Rowe, sued the orchestra for pay discrimination.  Encouraged by a new equal pay law in Massachusetts, Rowe is seeking to bridge the substantial gap in wages between her base pay and that of her closest peer, the (male) principal oboist.  Read the story at NPR and The New York Times.

One of the shocking things: this is the First Flute position that in 1952 was earned by Doriot Anthony Dywer, perhaps the most celebrated women in music to break the glass ceiling, becoming one of the first female principal players in a top-tier orchestra.  The story of her audition is engaging and startling — it took two days, and she was pitted in competition with another applicant.  Finally she impressed the auditioners with her brilliant musicianship and accomplishment — she simply had all (ALL) the flute repertoire for orchestra memorized, and could play any excerpt that they requested on demand! 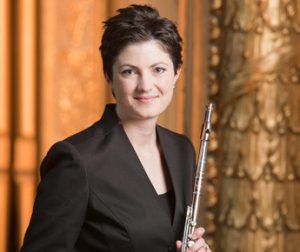 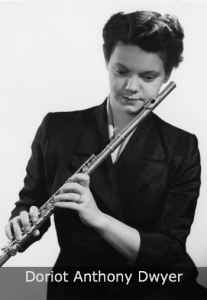 When finally offered the position, Dwyer had to ask that her salary be specified — the response was: “Oh, it will pay very well.” To which she responded, “Well, I don’t know what very well is. What is ‘very well?’”   “Well, how much do you want?”  Dwyer had researched salary levels, and named her price and could tell that the administrator was shocked. But she stood her ground. Dwyer “leaned in” and asked for equal treatment — now, after years of struggling for fair treatment, Rowe has put her foot down, and done the same.  It’s deja vu all over again — apparently women have to keep re-inventing the wheel, and constantly working for equitable treatment.  Special thanks to the doctoral dissertation of Kristen Kean, pp. 50-63.

Jay Derderian at I Care If You Listen spoke to Rod Deemer – founder of the Composer Diversity Database.  This expansive new resource allows users to search for and learn about composers and music that are not typically included in concert programming.  Learn more about where the idea came from, and where it’s going.

Christina Rusnak, President of the International Alliance for Women in Music, writes in New Music Box about the organization and women’s representation in music generally.  Rusnak specifically looks at the number of women who have won composing awards.  Read on here.

The San Francisco Classical Voice speaks with Gabriela Lena Frank about her Creative Academy of Music, numerous commissioned works, including an opera on the life of Frieda Kahlo that will be premiered in 2019-2020 by the Fort Worth Opera, and her optimism for the future.

AND — every summer the National Women’s Music Festival continues to include new and old  orchestral works in their rich and varied line-up — this year a new orchestral arrangement by Mary Watkins of Cris Williamson’s wonderful song, Sweet Woman, led by Nan Washburn. Truly a celebration!