New and music to start your week! A new set of albums have been released, remastering the recordings of contralto Marian Anderson, pictured above.  This groundbreaking performer had a tremendous talent, and overcame daunting obstacles in order to perform in history-making events.  NPR shares photos, history, and a sneak peek of the album, released August 27.

In the New York Times, Dr. Kira Thurman explores the ways in which Black American composers were often more accepted and celebrated in Europe than in their home country throughout their lifetimes. The insightful article explores the lives and music of several composers who were embraced across the Atlantic even as they were ignored on their home soil, and also considers the work to maintain and revive interest in these composers (including Florence Price) in recent decades.

Listen in to a performance of Germaine Tailleferre’s String Quartet at The Strad as performed by French ensemble Quatuor Métamorphoses:

We are saddened to hear of the passing of Micki Grant, a trailblazing composer who was the first woman to write the book, music, and lyrics of a Broadway musical, the award-winning “Don’t Bother Me, I Can’t Cope.”  Read more about her life and work in The New York Times. In 1972, the Times review enthused “It is the unexpected that is the most delightful. Last night … a new musical came clapping, stomping and stamping in. It is fresh, fun and Black.”

Andrew Clements reviews the exciting performance by Chineke! at Royal Albert Hall as part of the 2021 Proms.  Read on at The Guardian.  The orchestra, led by Kalena Bovell, played works by Samuel Coleridge-Taylor and Fela Sowande, and Florence Price’s Piano Concerto featured soloist Jeneba Kanneh-Mason.

A-R Editions announces a new edition of Ethel Smyth’s Serenade for orchestra (1889), with a companion volume, a Facsimile of the (photocopy of) the manuscript! An extensive preview of the score edition and the facsimile are on Google Books. As well as illuminating the early history of the work (the manuscript is marked from the first performance), let’s hope that it simulates more performances of it!  In the mean time have a listen to this recent recording by the Chamber Orchestra of the Springs (Colorado). 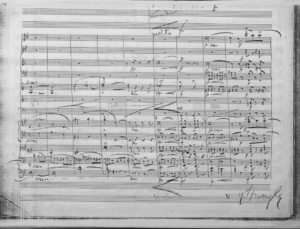