News to start your week!

We are saddened by the passing of American Pulitzer Prize-winning composer, pianist, and educator George Walker.  He claimed the title of “first” to many achievements in the classical music world, including: first African American pianist to play a recital at New York’s Town Hall, first black instrumentalist to play solo with the Philadelphia Orchestra, and first black graduate of the Curtis Institute of Music.  Read more at NPR. Walker was the first African American to receive the Pulitzer in music, which he won in 1996 for his work Lilacs (listen here). While we mourn his death, perhaps the news item will draw attention to his repertoire.

Peter Dobrin’s most recent column at The Philadelphia Inquirer, titled “Why adding women composers to the Philadelphia Orchestra mix isn’t only right, but also smart” brings great perspective on the situation in the City of “Brotherly Love.”  (Ahem.)  Make sure to give it a read!  Dobrin mentions that the Orchestra is having a “Showcase” (or workshop) of music by women on Sept. 6.  The Orchestra’s press release about that event is here.  One thing we are not clear about — Dobrin emphasizes that the event is open to the public — and can be a source or inspiration for girls and young women. However we don’t see any mention of the event on the PO calendar.  So is it open? Or hidden behind closed doors?  The two options send very different messages. [UPDATE: the event is now on the Philly Orchestra calendar, details HERE. So it is a real showcase and celebration!]

The Dallas Symphony Orchestra has announced a new effort to be more inclusive in programming.  Spearheaded by Kim Noltemy, the first female President and CEO of the orchestra, the ten year program will include commissions, composer-in-residence position, an annual symposium, and more.  Read on at NBC-DFW. 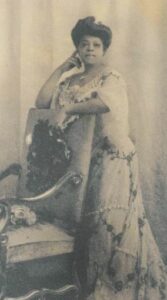 The New York Times has been recognizing the bias found in their past coverage of obituaries of popular figures- a point of history they are looking to correct with a series called Overlooked.  Last week the obituary they included was for opera singer Sissieretta Jones – the first African American woman to headline a concert on Carnegie Hall’s main stage.

What did we miss?  Let us know!  email info@wophil.org