We are deeply honored to have Dr. Marcia J. Citron as a guest blogger. Dr. Citron is Professor Emerita at the Shepherd School of Music, Rice University. The author of When Opera Meets Film (Cambridge UP, 2010) and Opera on Screen (Yale UP, 2000), her groundbreaking book Gender and the Musical Canon (1993, reprint 2000) continues to be essential reading in the area of feminism and music.  She is also the author of volumes on Cécile Chaminade (1988) and Fanny Mendelssohn Hensel (1987). In 2012 she was awarded Honorary Membership (for lifetime achievement) by the American Musicological Society, and she has received numerous fellowships and prizes.  As Dame Ethel Smyth continues to gain deserved recognition, we are happy to showcase again this significant production.

Houston may be excited by the Astros’s victory in the World Series, but Houston Grand Opera scored a major home run with its production of Ethel Smyth’s opera The Wreckers (1906). Composed to a French libretto by her friend Henry Brewster but first performed in German translation, in Leipzig, The Wreckers only received scattered performances through the years and was largely forgotten until Glyndebourne Opera Festival mounted a production in May 2022, in the original French. Meanwhile, Khori Dastoor, HGO’s incoming General Director from Opera San José, had the goal of expanding the company’s repertoire by staging neglected works. Not only is The Wreckers the showpiece of her inaugural season, but HGO’s production marks the opera’s debut in the United States by a major company. Who knows, it may augur a return to the kind of visionary leadership seen when David Gockley led the company, a tenure that premiered unconventional works such as Scott Joplin’s Treemonisha (1986), John Adams’s Nixon in China (1987), and Meredith Monk’s Atlas (1991). 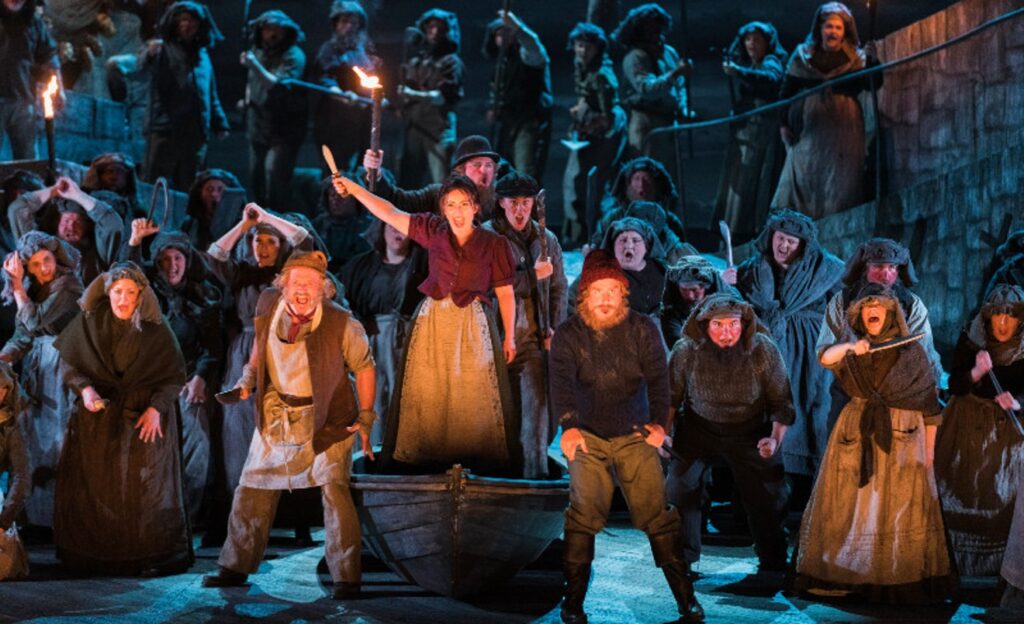 Mané Galoyan, soprano, as Avis, and the crowd, who portray the title role.

Houston’s Wreckers uses Amanda Holden’s English translation, created for a staging in Cornwall in 2006. The story is grim, dark, set in a village on the Cornish coast. The townsfolk, who are poor, deliberately let ships be wrecked so they can plunder for food and supplies to survive. This is tied to their deep religious faith; anyone who tries to prevent shipwrecks is evil and severely punished. Pastor Pascoe’s young wife Thirza, the main character, opposes the murder and hypocrisy, and with her lover Mark sets fires onshore to warn ships. The two are sentenced to death for apostasy and adultery, and as the curtain descends they’re engulfed by the rising tide. The plot also includes the unrequited love of Avis, the lighthouse keeper’s daughter, for Mark, and her jealousy of Thirza, stirring intense passions; and the fact that it is Pascoe, not the lovers, who is first accused (erroneously) of warning the ships. For many operagoers, the judgmental community, the seaside setting, and the outcast figures recall another English opera, Benjamin Britten’s Peter Grimes (1945). One wonders if Britten knew Smyth’s opera, or, more likely, if he was drawing from a similar tradition.

Christopher Oram’s visual production was superb. Unlike Glyndebourne’s, this was a traditional setting, and the bleakness of the community was conveyed in a drab gray tonality of boulders, church, and sea. Act II in particular stood out, clad in grisaille like an old comic-book drawing. It signaled something different, and indeed, the Act focused on individuals instead of community. Marcus Doshi’s lighting was also very effective. For instance, the opening chorus was colored by a bright, garish light that limned the community against the darkness. As if to underline the connection it returned for the last chorus of the Act. Meanwhile, director Louisa Muller did a fine job staging Smyth’s work. The chorus, such a major element of the story, was handled deftly with the right balance of stillness and movement. The townsfolk came off as rigid but also human, making it harder for us to consider them outright bigots.

Musically, The Wreckers offers a fascinating mix of styles. In some ways it’s a typical English work. Besides the setting and the fact that HGO performed it in English, the opera abounds in English folk elements. The shanty in particular, a folk genre sung by sailors as they work, appears several times and becomes a sonic motif of sorts. I’ve noted the choral presence in the outer Acts. But the basic idiom of The Wreckers is a through-composed declamatory style characteristic of its era. We experience only a few lyrical numbers, most of them in Act II. One highlight is the duet between Thirza and Mark, which shows traces of the famous love duet from Tristan und Isolde in its harmonies (especially the half-diminished-seventh chord), textual repetition, and love-death theme (“Love in life and in death”). On the whole, Smyth’s orchestration was brilliant and varied, and many moments stand out. For example, the winds feature prominently at Thirza’s first entrance and lend a quizzical touch as Avis, hidden, looks on. Especially memorable is the dark prelude (overture?) to Act III (originally the Prelude to Act II). With its magisterial orchestration and a length approaching a tone-poem, we can’t help but be reminded of Richard Strauss. 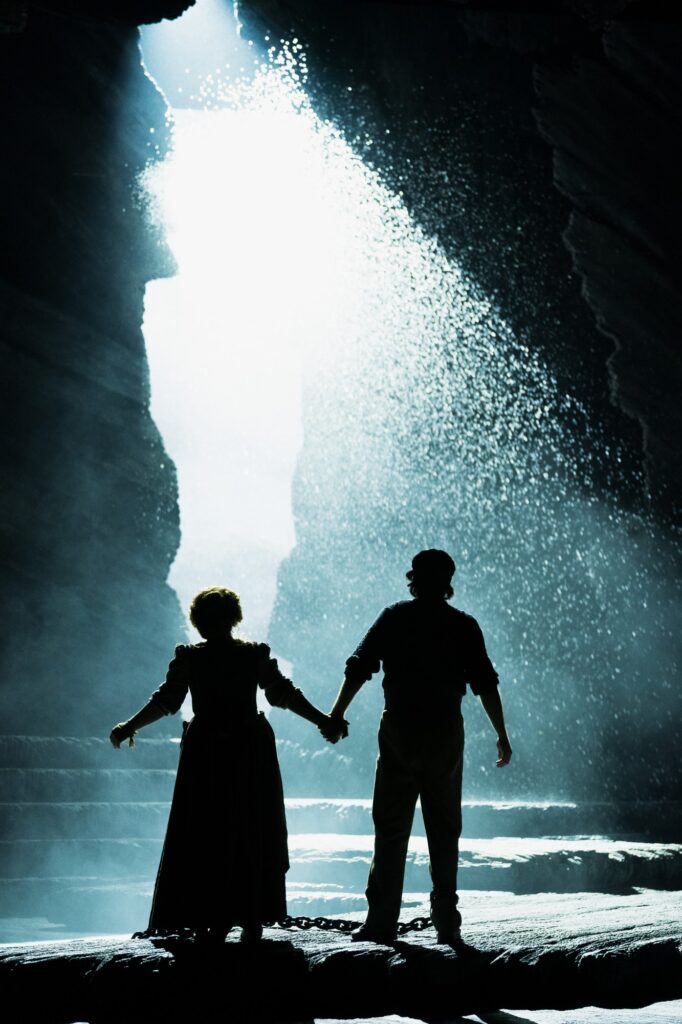 Mark and Thirza engulfed by the rising tide

It’s rather unusual to have a mezzo in the lead instead of a soprano. Yes, the title character of a very famous opera, Carmen, is a mezzo instead of a soprano, but there the register signifies a sultry sexuality and an exotic type, a gypsy, and might have been less unusual in opéra comique, Carmen’s genre. In The Wreckers, perhaps Smyth opted for a mezzo because she preferred a darker timbre and more constrained style in the somber setting, or wanted to blur the sexual lines in the love triangle—a triangle that, as suggested by program annotator Leah Broad, relates to Smyth’s real-life relationships with Henry Brewster and his wife Julia. The ambiguous sexuality of The Wreckers also extends to a trousers role, the character of Jack, an adolescent boy who touches on the triangle through his infatuation with Avis. Unlike Thirza and Jack, though, Avis comes across as strongly female with typical soprano lines that are sometimes coloratura in style, sometimes lyrical or dramatic.

Sasha Cooke was outstanding as Thirza. With a lush velvety sound and admirably restrained portrayal, Cooke conveyed beautifully the dignity and courage of the character. As Pastor Pascoe, baritone Reginald Smith, Jr., also affected a gravitas in voice and bearing that suited the drama. Tenor Norman Reinhardt depicted Mark with a lovely lyrical sound most of the time, but occasionally showed strain in the upper register. Completing the quartet of principals, soprano Mané Galoyan performed the role of Avis with verve and agility as spirited movements accompanied her wide-ranging music.  The HGO Orchestra led by Patrick Summers were magnificent in performing Smyth’s rich score. The HGO Chorus, representing the community with musical and physical conviction, were also splendid.

We can hope that it won’t take long to see another major production of The Wreckers. While it may not be a perfect work—one could, for instance, quibble with some of Smyth’s harmonic choices—its story and music are appealing and make it an obvious choice for inclusion in the operatic canon. Moreover, The Wreckers is the kind of work that provides a special opportunity for combining the old and the new in ways that operagoers crave: an old work in its musical accessibility, a new work in its unfamiliarity. Thank you, HGO, for bringing The Wreckers, to life.