We have news about women conductors this week!! 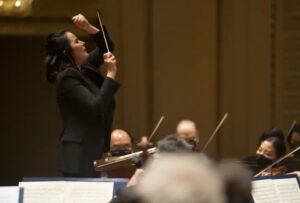 At the Chicago Symphony, Apprentice Conductor Lina González-Granados stepped in for Ricardo Muti with a minute’s notice – (really!)  exciting moments in the life of a young conductor, and she has earned acclaim all around!  (reports HERE and HERE in the Chicago press)  An intrepid musician, she has learned to deal with surprises calmly and effectively – here’s a report on a concert she led four years ago where the venue was suddenly closed, forcing the organizers to move the concert outside to the courtyard.  That concert included the north American premiere of Teresa Carreño’s Serenade for strings – let’s hope in the future, Chicago (and other orchestras) will have her program Carreño and other Latinx works that she has championed as the Director of Unitas Ensemble.  González-Granados is also Resident Conductor of the LA Opera. 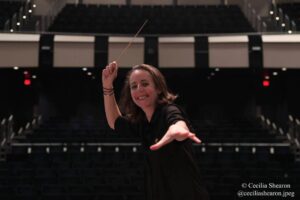 More exciting news from the conducting world – Mélisse Brunet was announced as the next music director of the Lexington Philharmonic – after initially being brought in as a substitute rather than as a candidate!

And a conductor (who is also a woman) is building the optimism at the Atlanta Symphony: Nathalie Stutzmann will start as Music Director in the fall, the only woman with that post at a top-pier U.S. orchestra.  She is part of the story (read it at ArtsATL ) of the orchestra’s successful turnaround from ten years ago, much of which is ascribed to the Executive Director Jennifer Barlament, who has consistently balanced the budget, as well working smoothly with the musicians.

Blogger and thoughtful music-lover Thomas Hogglestock has an excellent report on the inclusion (or lack thereof) of women conductors in the top 55 U.S. orchestras for the 2022-23 season.  Here are the movers and shakers among women conductors!

AND be inspired every day by Talia Ilan’s #oneconductoraday!

OK, that’s not all the news, but that’s enough for now!