Have you heard of this amazing classical-era royal musical dynasty from Prussia? Two generations of remarkable royals who, through their leadership and musical talent, shaped much of 18th-century German artistic culture and strongly influenced the development of classical music, composers themselves and also inspiring some of the finest works of the era. Allow me to introduce you to these four extraordinary women, a single family of rulers and composers.

The eldest child of Frederick I of Prussia and granddaughter of George I of Great Britain. For many familiar with classical music, Bayreuth may be synonymous with Wagner and the Bayreuth Festival, however its origins as a musical metropolis predate Wagner by over a century. After her arranged marriage to the Margravine of Bayreuth, Wilhelmina developed the town in the 1730’s as an artistic centre to rival Vienna, modelling it on Versailles. She oversaw the building of the Margravial Opera House, established its own opera company and wrote her grand opera  Argenore to inaugurate the building. Wilhelmine staged the operas herself, directing over 30 productions in the next 15 years and composing many of the works. Many of Europe’s leading talents found themselves drawn to Wilhelmine’s court: composer Johann Adolph Hasse, Adam Falckenhagen, who dedicated a set of sonatas to Wilhelmine, and composer and singer Anna le Bon. Although much of Wilhelmine’s work has been lost, her phenomenal opera Argenore survives, as well as gorgeous sonatas for flute and harpsichord. The harpsichord concerto is both recorded and published, available on Stretta Music.

Philippine Charlotte, the middle sister, made a name for herself as an intellectual and child of the Enlightenment, building a library of several thousand volumes, and surrounding herself with the finest writers and poets of the day. As a composer she wrote several pieces including a March for wind ensemble, full of classical stridency and poise. 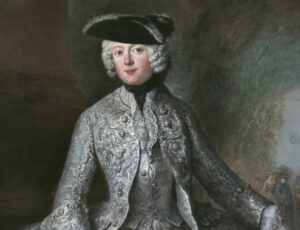 The youngest sister, Princess Anna Amalia, served as Princess Abbess of Quedlingberg, a secular abbey. In addition to curating a vast collection of over 600 volumes, now housed in the Berlin State Library, Anna Amalia spent most of her time composing in Berlin. Her good friend C.P.E. Bach wrote his organ sonatas Wq 70 for Princess Anna Amalia in the 1750’s. Unusually for the time, Anna Amalia composed several military wind band marches for the various German regiments, and she also wrote a Fugue (Trio Sonata) in D Major – a wonderfully layered work displaying elegance and sophistication.

Philippine Charlotte’s youngest daughter completes this extraordinary royal musical dynasty, not to be confused with Princess Anna Amalia, her aunt and possible namesake (see below). Duchess Anna Amalia ruled the state of Saxe-Weimar-Eisenach as regent between 1758 and 1775, restructuring the orchestra and revitalising the music scene, starting regular Saturday concerts before instigating Weimar’s famous Court of the Muses. The greatest in German and European intellectuals gathered at Anna Amalia’s Winter Palace, their numbers including Johann Wolfgang von Goethe, Friedrich Schiller and Johann Gottfried Herder, the leaders of Weimar classicism, all inspired by Duchess Anna Amalia. The literary talent balanced itself out with numerous composers and musicians, all attracted to the court and inspired by their patron.  One particular group includes another family of composers: court composer Ernst Wolf, his wife Maria Wolf (née Benda), her sister Juliane Reichardt (also née Benda), Juliane’s husband Johann Reichardt and their daughter Louise Reichardt. The latter two dedicated songs to Duchess Anna Amalia. Duchess Anna Amalia composed numerous works including a delightful Divertimento for Clarinet, Viola, Cello and Piano in 1780, thought to be the earliest chamber work containing the clarinet (ten years before Mozart’s famous concerto). Duchess Anna Amalia also composed an opera – Erwin und Elmire, collaborating with Goethe, who served as librettist. In this opera Anna Amalia combines various operatic styles and infuses folk music into the score. The glorious orchestral overture is available to listen and to play, published by Stretta Music.

Performances of music by members of this great dynasty remain tragically few and far between. The last time Erwin und Elmire was performed seems to be in 2018 by the Academy of Ancient Music in the UK, whilst The US based Redlands Symphony performance in March 2022, of music Princess Anna Amalia also appears to be a one-off. The Swedish premiere of Argenore took place last year by Den Andra Operan. I hope with this article and helping to bring awareness to the performance materials below, we can encourage you to start exploring these fascinating, brilliant composers!

M.A. Thesis: In The Shadow of Greatness: Women Composers and their Flute Sonatas at the Prussian Court by Sheila Hornberger (2020)