We are thrilled to unveil our newly updated and expanded database “500 Operas by Women”!!  Last week we scolded the Met Opera for their continued denial of women’s creativity as composers.  So here is our reply: HUNDREDS of operas from every era and a wide span of geographical regions.  We now have MANY more than 500 operas on the list, but we keep the original title as a metaphor, 500 as lots and lots that you want to explore and hear, and we hope sooner rather than later! We will be updating the list regularly, so be sure to let us know else should be there!  info@wophil.org

Speaking of opera (and ICYMI)  we ran across this important multi-facetted study:  “Excluded, Penalized, Indebted, Harassed: Systemic discrimination against women in opera” by Dana Lynne Varga. It details and documents with data and statistics, and reveals the alarming but in plain sight  doublestandards, including simply having separate rules for men and women, as in competitions that have different age limits for men and women.

Events abound for March 8, and from the many radio broadcasts to celebrate the important day, we’ll just highlight one, WUOL Classical Louisville’s “Her Music/Her Story” that will stream twice that day, and also is archived here.  We love the variety of composers and look forward to hearing the commentary.

In the UK, we found these two stories – of the oldest polyphonic music by a woman, recovered and restored – so you can hear it tomorrow!  And the other of music newly commissioned and set in a startlingly unconventional venue:

The madrigals of the 16th century composer Maddalena Casulana hold a significant place in history as the earliest such works by a woman, but some of them survived only in incomplete form.  Intrepid detective-work by scholar Dr. Laurie Stras has led to the recovery of the lost parts, so the completed works will be performed on the BBC tomorrow!

And some newly commissioned micro-operas by female composers, exploring themes of travel, will be performed in one of London’s major train stations.  While we appreciate the creativity of the project, offering travelers “the chance to pause, reflect and enjoy a moment of art and connection in an unlikely place,” we hope the new works will also have the opportunity to be heard by attentive listeners in a concert hall!

And the Irish Times interviews several participants in “Finding a Voice, a festival of music by female composers,” taking place March 5-8 in Clonmel, Ireland. We hear from the artistic director and co-founder, musicians, and a composer on the issues and themes of the festival. 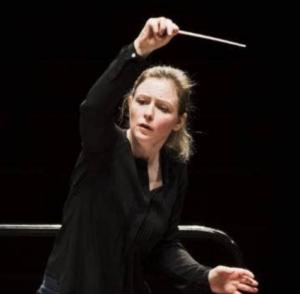 Conductor Gemma New (pictured) travels extensively in her busy career and has been based in the US for the past decade.  But her appointment as principal conductor and artistic advisor of the New Zealand Symphony Orchestra has just been announced.  It’s the first time in the NZSO’s 75-year history that a woman has held a principal conductor position. For the 35-year-old New, a native of the island nation, working with the NZSO is “a lifelong dream.”

And OUR lifelong dream is to have a classical music world not dominated by patriarchy!  Are we getting closer to that?  We’d love to hear from you!  info@wophil.org