Fanny Hensel at the Ballet

“Fanny for ballet!!” read the text message. I blinked and did a double-take at the accompanying photo. Indeed, selections of Fanny Hensel’s “Das Jahr” — The Year — a cycle of piano pieces composed in 1841, were the music for a new ballet, “Her Notes,” chorographed by Jessica Lang and being premiered by the American Ballet Theatre in New York City. 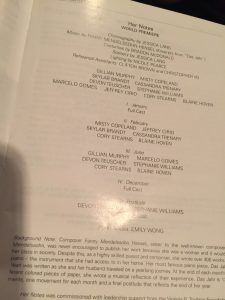 How exciting to think of Hensel’s powerful piano music being used as the basis of an expressive dance work.  In a video about the making of “Her Notes,” Lang explains “when I hear music, I see movement, and when I heard this piece “The Year” [Das Jahr] it inspired a very classical reaction in my mind … and I thought it would be great for ballet, and it would be the perfect piece for American Ballet Theatre.”

Fanny Hensel (1805-1847) is perhaps still best known as the sister of Felix Mendelssohn, but increasingly called by the name she preferred, her married name.  In creating “Das Jahr” she collaborated with her husband, Wilhelm Hensel, a painter and artist, in creating a multimedia work illustrating the months of a year: a special year of travel, discovery and reflection.  The surviving manuscript fair copy is a fascinating visual work of art, with each of the pieces copied onto different colors of paper, and illustrated with detailed drawings by her husband and framed with stanzas of poetry.  This completely original concept, and the overall power of the work, mark Fanny Hensel as a major figure of the 19th century.  Yet the piece was unknown and unpublished until 1989.  [illustration: January from Das Jahr.  The music was published by Furore in Germany, who also offer a facsimile of the manuscript version.] 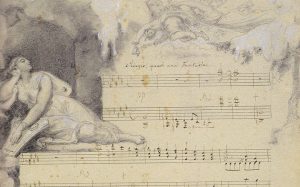 Jessica Lang uses five of the movements of the cycle in the ballet “Her Notes,” the pensive January, the spritely February (as effervescent as Fanny’s brother’s “Midsummer-night’s Dream Overture), then June, a wistful heartfelt  song,– a “song without words,” the genre she and her brother pioneered. Finally December—a cascading flurry of activity before the introduction of the somber hymn, “Von Himmel hoch” ( From Heaven on High), which begins meditatively, but then becomes more emphatic and bold.   It is this hymn section we see being danced to in the video about the making of “Her Notes.”  And finally, with the Postlude, the return to inward, thoughtful reflection, and a sense of resolution.

An article in the Wall Street Journal notes ballet’s struggle “with a lack of diversity and a lack of female choreographers.”  Lang was attracted to the music of “Das Jahr,” but also the resonances of Fanny’s struggle, to overcome the opposition of first her father, and then her brother, to her taking her composing seriously, have particular meaning for any brilliant and hardworking female artist seeking to make inroads in a male-dominated profession. 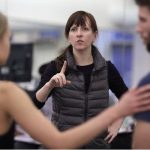 To me as an observer of women composers who,  even in the case of a familiar name like Fanny (Mendelssohn) Hensel, still receive so much less recognition than they deserve, find this incorporation of her music into another major art-work as a great step forward, a real landmark of progress.  After all, there is the iconic Misty Copeland  dancing to Fanny’s music — that’s exposure and recognition of another level!  OK, I’ll admit that I don’t follow dance at all, but I know about Copeland from hearing her on “Wait, Wait, Don’t Tell Me” — so that is really iconic!

So while we still hope to have more performances of Hensel’s music including orchestra — her Overture, her cantatas and oratorios — here is a real celebration of her music on another (and unexpected) great stage.

And here is Das Jahr in its entirety, performed by (pianist) Sarah Rothenburg.