Maria Theresia von Paradis (The Blind Enchantress, as she was sometimes known) captivated Europe with her prodigious music talents. She concertized widely, composed wonderful music, and became a powerful inspiration, both in classical music and through her work educating the blind.

Von Paradis’s father worked as court secretary for her namesake, the Empress Maria Theresa, who formed a fond attachment to the family. She granted them a generous allowance for von Paradis’s musical education, enabling her to study with some of the finest teachers and enhance her already extraordinary genius. One such teacher included Antonio Salieri; he would later dedicate his 1773 Organ Concerto in C to her, possibly written on her commission. 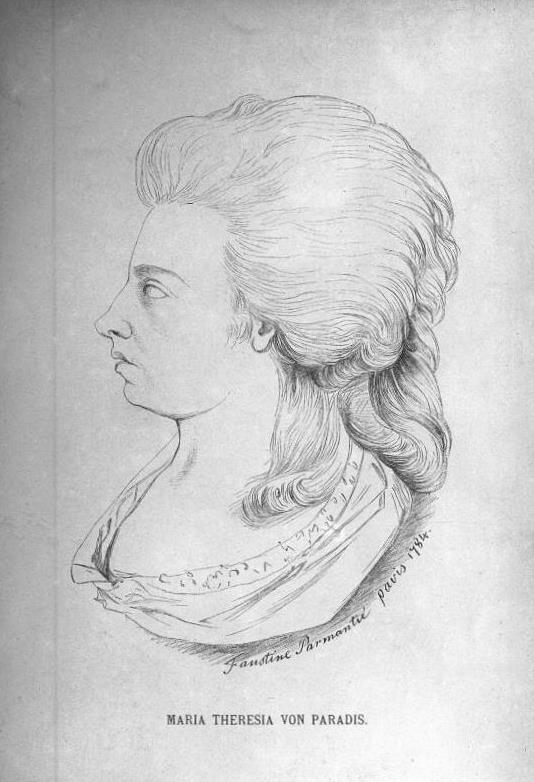 Based in Vienna, von Paradis positioned herself at the centre of cultural life. In addition to performing for Empress Maria Theresa, she befriended composers Joseph Haydn and Wolfgang Amadeus Mozart and both greatly admired her. Haydn wrote his Piano Concerto in G major Hob. XVIII:4 for her to premiere in 1784, whilst Mozart allegedly wrote his Piano Concerto No 18 in Bb major for von Paradis, this is however unsubstantiated. It’s curious that while Haydn, Salieri and Mozart are frequently mentioned in literature on von Paradis, nowhere can be found any of the other great female composers in Vienna. Marianna Martines, another favourite of Empress Maria Theresa, or Josepha Auernhammer, a fellow pupil of Leopold Koželuch, are examples of composers we might expect to have known von Paradis. All these women worked at the heart of the Viennese musical community, so it’s almost guaranteed that they knew each other. We have to wonder if mentions of the contact between these women have been excluded from the historical records.  After all, the sources that we have to rely on, in constructing a picture of the past, sometimes were built on biased observations.

At the age of 24, Maria Theresia departed on a three-year European tour, spending months each in Paris, London, Switzerland, and Prague. In London she performed at the most exclusive clubs and gained more royal favours, playing for King George III, the Queen, and the Prince of Wales (later George IV).

Von Paradis left a remarkable legacy for the blind. First, she proved that blindness needn’t be an obstacle to education and achieving success as a musician; hundreds of concert attendees would have been inspired by this great musician. But she was not just a role model from afar: Von Paradis met and advised Valentin Haüy in Paris; she directly influenced his decision to open his famous school. He in turn influenced his student Louis Braille, who invented the universal Braille system used today. Back in Vienna, Maria Theresia opened her own school for blind girls in 1808, giving dozens a sound education and offering a place of hope and community. Her will left the school funded for decades after her death.

Maria Theresia von Paradis wrote a great many compositions, numbering two piano concertos, five operas, twelve piano sonatas and various songs. While most have been lost, a small assortment of her oeuvre remains: the Fantasie in G Major for piano from 1807 (published on Stretta Music and found on YouTube), a set of twelve Lieder published in 1786 (available on IMSLP), the cantata Ludwigs des Unglücklichen from 1793 (also found on IMSLP), and the orchestral overture to her opera Der Schulkandidat (published by ClarNan editions, and available through  Classical Vocal Reprints.  These surviving compositions provide a glimpse into the variety and vision of this great composer.

The work most associated with Maria Theresia von Paradis is the misattributed Sicilienne, actually composed by Samuel Dushkin (who claimed to have discovered it). We’ll have more to say about this in a later post.

Von Paradis wrote her second opera Der Schulkandidat (The School Candidate) in 1791-2, the premiere took place on December 5, 1792 at Vienna’s Marinelli Theatre, running until January 1793. A comic opera, Der Schulkandidat contains common characters of the comedia dell’arte form popular at that time – the young lovers, disapproving parents, rivals, and comedy sidekicks. Unfortunately, much of Act II and III is now lost as well as the libretto. The overture itself was a lucky find at Austria’s Linz Museum in 1962, improperly catalogued under ‘Tavadis’.

The Overture to Der Schulkandidat remains von Paradis’s only published section of the opera and her only surviving orchestral work. In 1992, von Paradis scholar Hidemi Matsushita published and edited Overture to Der Schulkandidat, after previously writing the first dissertation on von Paradis in 1989. Then in 1994, our own Women’s Philharmonic performed the fabulous overture. Nearly 30 years later we are proud to continue their legacy by shining a light back on this wonderful piece.

In Part II of our COTM feature, we will report further on Dr. Matsushita’s research, as well as discuss the famous fraud (the Sicilienne).

Fantasie in G Major for Piano