This week we are celebrating the birthday of American composer Undine Smith Moore.  She was born August 25, 1904 and died February 6 1989. 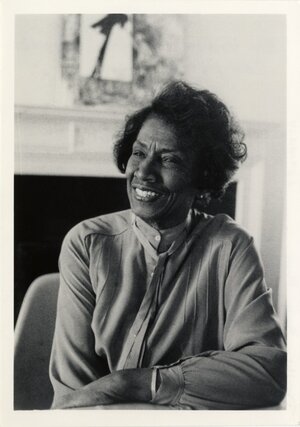 Considered the “Dean of Black Women Composers” she was in the generation that followed the groundbreaking work of Florence Price.  Trained as a classical pianist, she turned to composition.  Her output was primarily vocal, inspired by Black spirituals and folk music.  She composed prolifically – completing over 100 pieces in her lifetime – but only 26 were published during her lifetime.

Moore’s music education began as a child in Virginia, taking piano lessons at the age of seven, which eventually led to her attendance at Fisk University where she majored in piano and organ.  Moore became the first Fisk student to ever receive a scholarship from Juilliard, and went on to complete a Masters of Arts and professional diploma at Columbia University’s Teacher’s College.

In addition to her prolific compositional output, Moore was a devoted educator, for which she received many rewards at the end of her career.  She turned down opportunities for further compositional study to take the role of supervisor of music in public schools in Goldsboro, North Carolina.  She would also teach at Virginia State College.

In advocating for the work of Black musicians, Moore was co-founder of the Black Music Center at Virginia State College in 1969, which sought to bring to light the contributions of Black Americans to the musical culture of the United States and throughout the world.  Moore was active and vocal throughout the Civil Rights Movement in the United States.  As the granddaughter of slaves and being raised during the era of Jim Crow, Moore often reflected about the ways in which racism impacted her personally – from day to day liberties to the music she composed.  She is quoted as saying:

“One of the most evil effects of racism in my time was the limits it placed upon the aspirations of blacks, so that though I have been ‘making up’ and creating music all my life, in my childhood or even in college I would not have thought of calling myself a composer or aspiring to be one.”

But compose she did – prolifically and to great success.  In addition to her works for voice and piano and chamber ensembles, she is perhaps best known for her large-form works for chorus and orchestra, such as her oratorio Scenes From the Life of a Martyr.  Moore composed the libretto and the music for the 16 section-work based on the life of Martin Luther King, Jr. which includes excerpts from the Bible, quotations from King, and poetry.  Composed over four years, it was completed in 1980 and nominated for the Pulitzer Prize the following year.  Listen below to an excerpt as performed by the Detroit Symphony Orchestra:

Moore passed away in 1989 at the age of 84 after suffering a stroke.  Much remains to be said about her life and work, and her music still awaits its well-deserved time in the spotlight, and inclusion in regular performing repertoires.  Of the over 100 pieces penned, more than three-quarters of that still waits to be published, performed, and appreciated.  Moore celebrated her heritage and traditions throughout her music – listen in below to better appreciate her stunning compositional approach, and – on the 114th anniversary of her birth – appreciate this accomplished American composer.