To honor Alma Mahler on her birthday (she was born Alma Maria Schindler on 31 August 1879 in Vienna), I thought I would highlight some of her music, but also note the issue that 17 songs are all that survive of her compositional output, and consider why that is.  Then I discovered what is called the “Alma Problem,” and also that an important new article has reevaluated Alma’s life and legacy in light of the #MeToo movement.

Alma Mahler is often criticized for what some see as an inaccurate representation of her husband Gustav.  In fact the “Alma Problem” has its own article in Wikipedia.  My first thought, on seeing that article, was that it would address the “problem” of Gustav’s insistence of Alma giving up composing as a condition of their marriage.  Instead the “Alma Problem” is the perceived distortion of her husband’s legacy by his widow.  Gustav is the “aggrieved party” of the so-called Alma Problem. 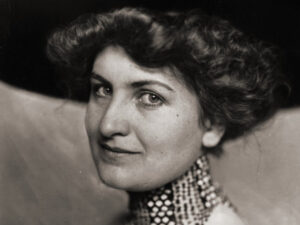 His notorious letter, written before they married, is an epistolary steamroller.  It demands that Alma give up her composing, and also to abandon any desire to be an autonomous human being, before they married. It is revelatory to read in full.  A few excerpts offer only a taste, but not the tone of the different sections (from Gustav Mahler: Letters to his Wife, pp. 78-84):

The roles [in marriage] must be correctly cast. The role of the composer, the breadwinner is mine; yours is that of the loving partner, the sympathetic comrade .….

You must know what I demand and expect of you, you must ‘renounce’ (your word) everything superficial and conventional, all vanity and outward show (concerning your individuality and your work) — you must surrender yourself to me unconditionally; make every detail of your future life completely dependent on my needs…..

A husband and wife who are both composers: how do you envisage that? Such a strange relationship between rivals: do you have any idea how ridiculous it would appear, Can you imagine the loss of self-respect it would later cause us both?

Recently musicologist Dr. Nancy Newman has reevaluated Alma Mahler in light of the #MeToo movement.  In an article in the Journal of the American Musicological Society, “#AlmaToo: The Art of Being Believed,”   “I explore key elements in their relationship, such as the devastating letter in which Gustav forbade her to compose, in terms of new conceptualizations of gaslighting, grooming, consent, character assessment, and believability articulated by the #MeToo movement. This theoretical foundation grounds extensive critique of both the conventions of fin-de-siècle Vienna and the chauvinism of late twentieth-century scholars.”

Although Alma composed more than 50 works, including part of an opera, only 17 songs survive.  They have been orchestrated and arranged, including this set of four that was performed by The Women’s Philharmonic in 1993.  Here is a recording of all 17 (in an orchestrated version).

Happy Birthday, Alma!  You deserve to be listened to, and to be believed.