About our 2012 Performance Grants

Women’s Philharmonic Advocacy Awards over $18,000 in First Ever Performance Grants (2012)

Over $18,000 was awarded to more than 20 US orchestras, with approximately half the funding going to youth or school ensembles. Recipients included the American Composers Orchestra, the Nashville Symphony and the San Jose Chamber Orchestra. In the youth category, Green Mountain Youth Symphony, Kennesaw State University Symphony and Oregon Pro Arte Youth Chamber Orchestra, among others, received grants.

“We were thrilled by the range of responses to our grant, and the many creative proposals. These wonderful concerts will do much to highlight the works of women composers,” said WPA President Liane Curtis.

Works to be performed will include those by relatively well-known contemporary composers Chen Yi and Jennifer Higdon, historic composers Amy Beach and Lili Boulanger, as well as newcomers just launching their careers.

Curtis hopes to continue the Performance Grants on an annual basis. The need is great: according to data collected by League of American Orchestras, less than 1% of the current US orchestral repertoire is by women composers. Applicants were judged based not only on the quality of the work proposed and artistry of the
ensemble, but also their overall commitment to programming music composed by women.

The first concert by a grant recipient will be on January 12, 2013 when the Eastern Connecticut Symphony will perform Emily Cooley’s “Render and Reach.” 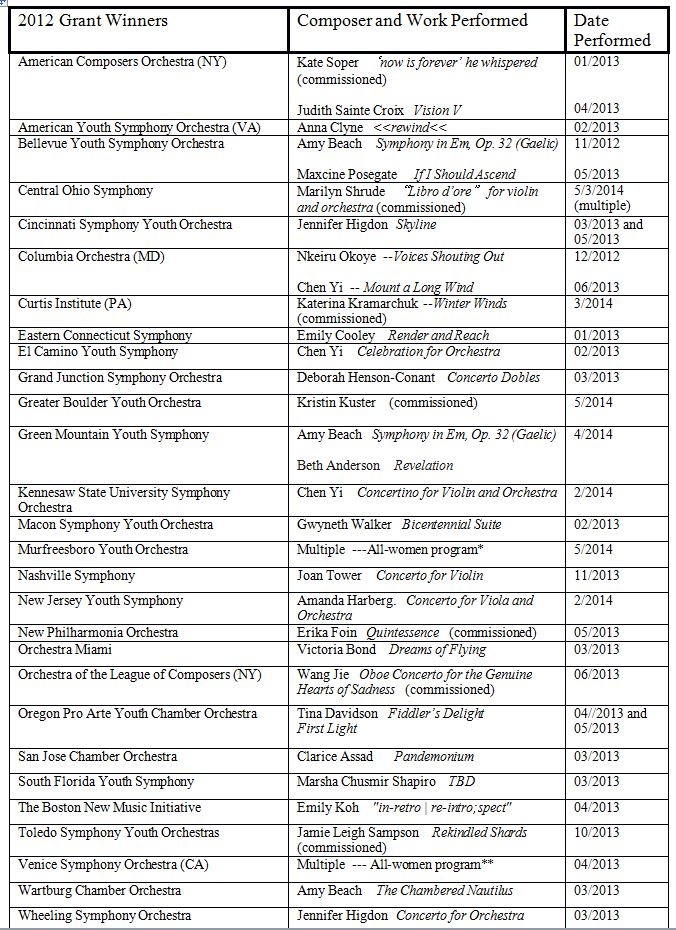